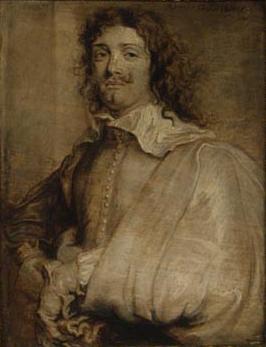 Adriaen Brouwer (Oudenaarde, c. 1605 – Antwerp, January 1638) was a Flemish painter active in Flanders and the Dutch Republic in the first half of the 17th century. Brouwer was an important innovator of genre painting through his vivid depictions of peasants, soldiers and other 'lower class' individuals engaged in drinking, smoking, card or dice playing, fighting, music making etc. in taverns or rural settings. Brouwer contributed to the development of the genre of tronies, i.e. head or facial studies, which investigate varieties of expression. In his final year he produced a few landscapes of a tragic intensity. Brouwer's work had an important influence on the next generation of Flemish and Dutch genre painters.

There are still a number of unresolved questions surrounding the early life and career of Adriaen Brouwer. The early Dutch biographer Arnold Houbraken included multiple erroneous statements and fanciful stories about Brouwer in his The Great Theatre of Dutch Painters of 1718-1719. The most glaring mistakes of Houbraken were to place Brouwer's place of birth in Haarlem in the Dutch Republic and to identify Frans Hals as his master.

It is now generally accepted that Brouwer was born in Oudenaarde in Flanders in the year 1605 or 1606. His father who was also called Adriaen worked as a tapestry designer in Oudenaarde, at the time an important center for tapestry production in Flanders. The father died in poverty when Adriaen the younger was only 15–16 years old. Brouwer had by that time already left the paternal home.

Brouwer worked in Antwerp in 1622. By March 1625 Adriaen Brouwer was recorded in Amsterdam where he resided in the inn of the painter Barent van Someren. Brouwer is further recorded on 23 July 1626 as a notary's witness when he signed a statement of Barend van Someren and Adriaen van Nieulandt about at a sale of pictures in Amsterdam. It is possible that by that time he already lived in Haarlem. He was active in the Chamber of Rhetoric 'De Wijngaertranken' in Haarlem. The motto of this amateur literary circle was: In Love Above All Else.

In 1631 Brouwer returned to his native Flanders where he was registered as a master in the Antwerp Guild of St Luke even before he had become a poorter of Antwerp. The artist continued to live and work in Antwerp until his untimely death. The artist's name regularly shows up in Antwerp records usually in connection with arrangements for his various debts.

In 1633 Brouwer was jailed in the citadel of Antwerp. The reason for the imprisonment is not clear. Possibly it was for tax evasion, or, alternatively, for political reasons because the local authorities may have considered him to be a spy for the Dutch Republic. The operation of the bakery in the Antwerp citadel was in the hands of the baker Joos van Craesbeeck. It is assumed that Brouwer and van Craesbeeck likely got to know each other during this time. Based on information provided by contemporary Flemish biographer Cornelis de Bie in his book Het Gulden Cabinet van Craesbeeck is believed to have become Brouwer's pupil and best friend. Their relationship was described by de Bie as ‘Soo d'oude songhen, soo pypen de jonghen’ (As the old ones sang, so the young ones chirp’). The stylistic similarities of van Craesbeeck's early work with that of Brouwer seem to corroborate such pupilage.