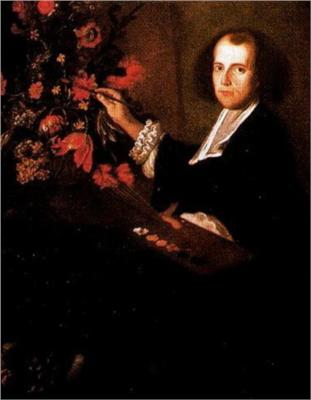 Mario Nuzzi, or Mario de' Fiori (1603 in Penne, Province of Pescara–1673 in Rome) was an Italian painter of the Baroque period, active mainly in Rome. He was a pupil of the painter Tommaso Salini. He was among the first Italians specializing in still life painting of flower arrangements. He also painted a celebrated Concert of Birds, an often repeated model which here arranges an encyclopedic diversity of realistically depicted fowl on branches as a chorus around an owl.

Among his pupils were Laura Bernasconi, Domenico Bettini and Florentine Bartolomeo Bimbi. A painting of Nuzzi at work, features a portrait by Giovanni Maria Morandi, he also painted Self Portrait with Flowers in 1640, Metal Decorated Vase with Different Flowers and Roses around 1650 and 1655 (oil on panel: 95.5x71.5 cm) which is now on display in Riga, Latvia, Adoration of the Magi in 1654 which now hangs at the Hermitage Museum in St. Petersburg, Russia and Mirror of the Three Putti painted in 1660 which is now hangs at the Colonna Gallery, Rome. He joined the Accademia di San Luca in Rome in 1657.