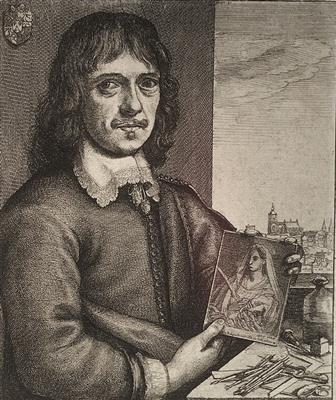 Wenceslaus Hollar (13 July 1607 – 25 March 1677) was a prolific and accomplished Bohemian graphic artist of the 17th century, who spent much of his life in England. He is known to German speakers as Wenzel Hollar; and to Czech speakers as Václav Hollar Czech: [ˈvaːtslav ˈɦolar]. He is particularly noted for his engravings and etchings. He was born in Prague, died in London, and was buried at St Margaret's Church, Westminster.


After his family was ruined by the Sack of Prague in the Thirty Years' War, the young Hollar, who had been destined for the legal profession, decided to become an artist. The earliest of his works that have come down to us are dated 1625 and 1626; they are small plates, and one of them is a copy of a "Virgin and Child" by Dürer, whose influence upon Hollar's work was always great. In 1627 he was in Frankfurt where he was apprenticed to the renowned engraver Matthäus Merian. In 1630 he lived in Strasbourg, Mainz and Koblenz, where Hollar portrayed the towns, castles, and landscapes of the Middle Rhine Valley. In 1633 he moved to Cologne.


It was in 1636 that he attracted the notice of the famous nobleman and art collector Thomas Howard, 21st Earl of Arundel, then on a diplomatic mission to the imperial court of Emperor Ferdinand II. Employed as a draftsman, he travelled with Arundel to Vienna and Prague. In Cologne in 1635, Hollar published his first book. In 1637 he went with Arundel to England, where he remained in the earl's household for many years.


Though he remained an artist in service of Lord Arundel, he seems not to have worked exclusively for him, and after the earl's death in Padua in 1646, Hollar earned his living by working for various authors and publishers, which was afterwards his primary means of distribution. After Lord Arundel's death in 1646, probably at the request of Hendrik van der Borcht, he etched a commemorative print done after a design by Cornelius Schut in Arundel's honour, dedicated to his widow Aletheia. Arundel is seated in melancholy mode on his tomb in front of an obelisk (perhaps commemorating the one he tried to import from Rome), and surrounded by works of art and their personifications.


In 1745, George Vertue paid homage to their association in the vignette he published on page one of his Description of the Works of the Ingenious Delineator and Engraver Wenceslaus Hollar. It featured a bust of Arundel in front of a pyramid, symbolizing immortality, surrounded by illustrated books and the instruments of Hollar's trade.


During his first year in England he created "View of Greenwich", later issued by Peter Stent, the print-seller. Nearly 3 feet (0.9 m) long, he received thirty shillings for the plate, a small fraction of its present value. Afterwards he fixed the price of his work at fourpence an hour, and measured his time by a sand-glass. On July 4, 1641 Hollar married a lady-in-waiting to the Countess of Norfolk. Her name was Tracy; they had two children. Arundel had left England by 1642, and Hollar passed into the service of the Duke of York, taking with him his young family.