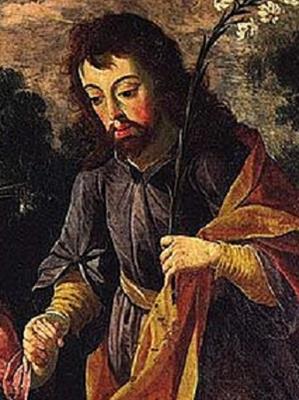 Josefa de Óbidos (Portuguese: [ʒuˈzɛfɐ ð(j) ˈɔβiðuʃ]; ca. 1630 – 22 July 1684) was a Spanish-born Portuguese painter. Her birth name was Josefa de Ayala Figueira, but she signed her work as, "Josefa em Óbidos" or, "Josefa de Ayalla". All of her work was executed in Portugal, her father's native country, where she lived from the age of four. Approximately 150 works of art have been attributed to Josefa de Óbidos, making her one of the most prolific Baroque artists in Portugal.

Josefa de Óbidos was baptized in Seville, Spain on February 20, 1630; her godfather was the notable Sevillian painter Francisco de Herrera the Elder. Her father, Baltazar Gomes Figueira (pt), was a Portuguese painter from the village of Óbidos. He went to Seville in the 1620s to improve his painting technique and, while there, married Catarina de Ayala y Cabrera, a native Andalusian, who would become the mother of Josefa. By May 3, 1634, the family is recorded living in Figueira's native Óbidos on the occasion of the baptism of their first son, Francisco.

In 1644, Josefa is documented as a boarder at the Augustinian Convent of Santa Ana in Coimbra, while her father was in nearby Santa Cruz, working on an altarpiece for the church of Nossa Senhora da Graça. While in residence at this convent in 1646, Josefa made engravings of St. Catherine and St. Peter, her earliest signed extant works. Josefa's first signed painting dates to 1647, a small Mystical Marriage of St. Catherine on copper (Museu Nacional de Arte Antiga, Lisbon), completed for the Augustinian Monastery of Santa Cruz in Coimbra. In the same year, she completed other small paintings on copper, including a Nativity Scene with St. Francis and Saint Clare Adoring the Newborn Christ (private collection).

Sometime before 1653, she and her family left Coimbra and settled in Óbidos, where she contributed an allegory of Wisdom to the Novos estatutos da Universidade de Coimbra, the book of rules for the University of Coimbra, the frontispiece of which was being decorated by her father.

During the decades that followed, Josefa executed several religious altarpieces for churches and convents in central Portugal, as well as paintings of portraits and still-life for private customers.

Josefa's will is dated June 13, 1684. In this document, the artist is described as having been "emancipated with the consent of her parents" and a "virgin who never married." She died on July 22, 1684 at the age of fifty-four, survived by her mother and two nieces (her father had died on December 27, 1674). She was buried in the Church of Saint Peter of Óbidos.

In the course of her career, Josefa de Óbidos received many important public commissions for altarpieces and other paintings to be displayed in churches and monasteries throughout central Portugal. Examples include the six canvases for the Saint Catherine altarpiece for the church of Santa Maria de Óbidos in 1661, six paintings representing Saint Theresa of Ávila (1672–1673) for the Carmelite Convent of Cascais, an Adoration of the Shepherds for the convent of Santa Madalena in Alcobaça (1669), and four paintings for the Casa de Misericórdia of Peniche (1679).