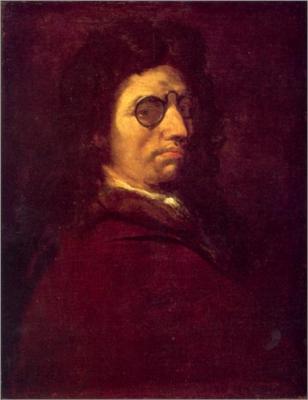 Luca Giordano (18 October 1634 – 12 January 1705) was an Italian late Baroque painter and printmaker in etching. Fluent and decorative, he worked successfully in Naples and Rome, Florence and Venice, before spending a decade in Spain.

Born in Naples, Giordano was the son of the painter Antonio Giordano. In around 1650 he was apprenticed to Ribera on the recommendation of the viceroy of Naples and his early work was heavily influenced by his teacher. Like Ribera, he painted many half-length figures of philosophers, either imaginary portraits of specific figures, or generic types.

He acquired the nickname Luca fa presto, which translates into "Luca paints quickly." His speed, in design as well as handiwork, and his versatility, which enabled him to imitate other painters deceptively, earned for him two other epithets, "The Thunderbolt" (Fulmine) and "The Proteus" of painting.

Following a period studying in Rome, Parma and Venice, Giordano developed an elaborate Baroque style fusing Venetian and Roman Influences. His mature work combines the ornamental pomp of Paul Veronese with the lively complex schemes, the "grand manner", of Pietro da Cortona. He is also noted for his lively and showy use of colour.

In 1682–1683 Giordano painted various fresco series in Florence, including one in the dome of Corsini Chapel of the Chiesa del Carmine. In the large block occupied by the former Medici palace, he painted the ceiling of the Biblioteca Riccardiana (Allegory of Divine Wisdom) and the long gallery of the Palazzo Medici-Riccardi. The vast frescoes of the latter are contained in the 1670s gallery addition, overlooking the gardens. The planning was overseen by Alessandro Segni and commissioned by Francesco Riccardi. They include the prototypic hagiographic celebration of the Medici family in the center, surrounded by a series of interlocking narratives: allegorical figures (the Cardinal Virtues, the Elements of Nature) and mythological episodes (Neptune and Amphitrita, The Rape of Proserpine, The Triumphal procession of Bacchus, The Death of Adonis, Ceres and Triptolemus).

In 1692 Giordano went to Spain at the invitation of Charles II. He stayed there for ten years, returning to Naples in 1702, following Charles' death. While in Spain, he painted major decorative schemes at the Buen Retiro Palace, El Escorial, the sacristry of Toledo Cathedral, and other sites. He also painted many pictures for the court, private patrons and churches. His pupils, Aniello Rossi and Matteo Pacelli, assisted him in Spain. Giordano was popular at the Spanish court, and the king granted him the title of a "caballero".

After his return to Naples early in 1702, Giordano continued to paint prolifically. Executed in a lighter, less rhetorical style, these late works, prefiguring Rococo, proved influential throughout the eighteenth century, and were admired by Fragonard.

He spent large sums in acts of munificence, and was particularly liberal to poorer artists. One of his maxims was that the good painter is the one whom the public like, and that the public are attracted more by colour than by design.

Giordano had an astonishing facility, which often lead to an impression of superficiality of his works. He left many works in Rome, and far more in Naples. Of the latter, his Christ expelling the Traders from the Temple in the church of the Padri Girolamini, a colossal work, full of expressive "lazzaroni" or beggars from Naples; also the frescoes of the Triumph of Judith at San Martino[1], and those in the Tesoro della Certosa, including the subject of Moses and the Brazen Serpent; and the cupola paintings in the Church of Santa Brigida. This church contains the artist's own tomb. Other notable examples are the Judgment of Paris in the Berlin Museum, and Christ with the Doctors in the Temple, in the Corsini Gallery of Rome. In later years, he painted influential frescoes for the Cappella Corsini, the Palazzo Medici-Riccardi and other works.