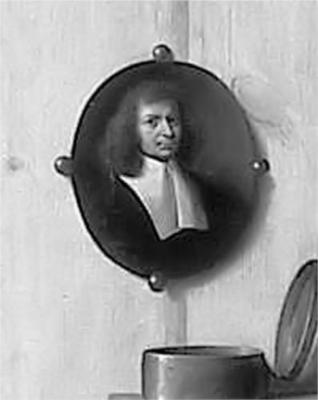 Cornelis Norbertus Gijsbrechts or Gysbrechts (ca 1630 - c. 1675) was a Flemish painter working in Belgium, Germany, Denmark and Sweden in the second half of the seventeenth century. He specialised in trompe-l'œil; an artistic genre aiming to trick contemporary viewers into believing that the painted, two-dimensional illusions were real three-dimensional objects.

It is not known with certainty where and when Gijsbrechts was born, and his activities in the last years of his life are also undocumented, just as his name is not mentioned in the contemporary art historical literature. His oldest known painting is dated 1657. He was probably in Germany in the early 1660s, among other places in Regensburg, where he might have been in Emperor Leopold I’s service, but this is not known for a fact. Around 1664/1665, it is presumed that Gijsbrechts went to Hamburg where he stayed for a few years.

Gijsbrechts came to Denmark at the latest in 1668, and here he was hired as court artist by the autocratic Danish king Frederik III from 1668–70, and hereafter by Christian V from 1670-72. He had his studio in The Royal Garden by Rosenborg Castle and from 1670 he called himself Court painter.

In the period 1670–72 he received payment for several paintings, i.a. paintings for Rosenborg Castle. After having left Copenhagen, he is believed to have been in Stockholm, where in 1673 he painted a large letter rack commissioned by the bourgeoisie of the town. In 1675, he was once again in Germany and this is also the year in which his last known work was made. Hereafter, very little is known of his activities.

During his four years in Copenhagen, Gijsbrechts painted about 22 trompe l’oeil paintings out of which 10 are found in the collection of The National Gallery of Denmark (Statens Museum for Kunst – SMK). Only about 70 works can with certainty be attributed to Gijsbrechts, and is it therefore quite remarkable that 22 of these are found in Copenhagen today. Besides the 19 works at SMK, two works are found at Rosenborg Castle, and one at The Museum of National History at Frederiksborg Castle. The collection in Copenhagen is viewed as the largest and most important Gijsbrechts collection in the world.

Gijsbrechts almost exclusively painted trompe l’oeil and vanitas paintings which were popular around the second half of the 17th century.

The earliest known painting by Gijsbrechts is a vanitas still life from 1657. Up until 1662 he primarily worked in this genre. Most often, his vanitas still lifes consist of accumulations of traditional symbols of the transience of life, e.g. a skull with a wreath of straw, flowers in a vase, a burned down candle, and an hourglass, referring to the measured time of human life.

After 1662, Gijsbrechts abandoned the pure vanitas still life paintings to allow the vanitas motifs to enter into more complex trompe l’oeil compositions as partial elements, e.g. in the so-called studio walls, letter racks (the notice boards of the era), board walls with hunting implements and musical instruments, and “chantournés” (cut-outs). The latter took the deception of the eye one step further, as the painted tree or linen was also cut in a shape meant to fool spectators into believing that they were standing in front of a three-dimensional object. For the illusion to be convincing, Gijsbrechts primarily painted motifs and objects naturally found in the surroundings of the royal family, and he painted these as close to the natural sizes as possible.