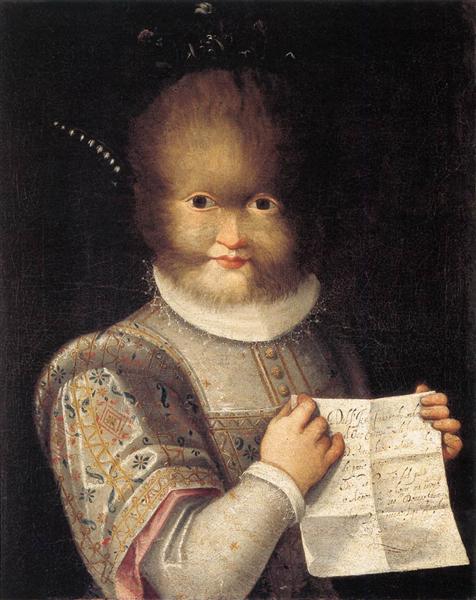 Antonietta Gonzalez (as well as her father, two sisters and other family members) had hypertrichosis (also commonly called “werewolf syndrome”), which is a rare genetic disorder which causes an abnormal amount of hair on the body. Antonietta’s father, Pedro (sometimes written as Pedrus) Gonzalez, was the first known person to be affected with this disorder. Given the rarity of the disease, it seems a little surprising that so many people within the Gonzalez family were affected by hypertrichosis. One writer noted that in terms of pathology, “the Gonzales sisters were one in a billion – all three of them.”

Antonietta and her sisters were welcomed into the courts of Europe, having received considerable attention from physicians and nobles alike and also being subject to medical investigations and portrait sittings. Antonietta explains a little of her personal history in the handwritten note which she holds in the portrait: “Don Pietro, a wild man discovered in the Canary Islands, was conveyed to his most serene highness Henry the king of France, and from there came to his Excellency the Duke of Parma. From whom [came] I, Antonietta, and now I can be found nearby at the court of the Lady Isabella Pallavicina, the honorable Marchesa of Soragna.” Historian Merry Weisner-Hanks has speculated that Lavinia Fontana met Antonietta in Parma.

The painting can be seen in the Musée du Château, Blois.