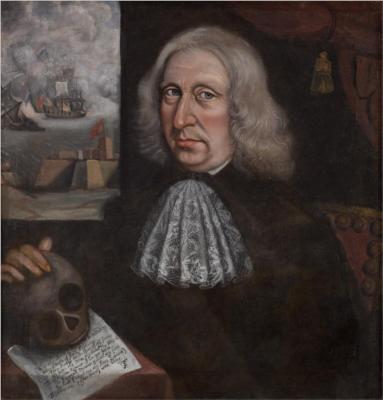 Little is known about Smith's life. He lived in Boston, and is believed to be the same Thomas Smith who was commissioned by Harvard College on 2 June 1680 to produce a portrait of the Puritan theologian William Ames. Because several Thomas Smiths were active in Boston in the late seventeenth century, it is very difficult to identify other contemporary references to persons of that name with the artist. Smith is assumed to have been a mariner and a Puritan based on his self-portrait, which can be traced back to Smith's granddaughter, Catherina Mears Dexter (1701–1797).

Smith's style has similarities with English and Dutch Golden Age painting, such as his expressive use of light and shadow. The sitter is shown seated on a chair with maroon upholstery and studs. Smith wears a typically Puritan dark coat and lace jabot. A maroon curtain and golden tassel appear in the top-right corner, lending a sense of depth to the portrait. From a window in the top-left corner is depicted a naval battle between Dutch and English forces and an unidentified enemy. Beneath them, a fortification is shown flying two red flags, one of which has three white crescents. The image may well refer to a significant event in Smith's career. The skull, a memento mori, has unrealistically round eye sockets like those found on contemporary funerary engravings in New England.

Beneath the skull in the bottom-left corner is a piece of paper that contains an eight-line poem:

The monogram T. S. led critics to assume that Smith composed the verses, which describe the speaker's resignation from the world's troubles in order to seek divine solace. In fact, the poem is Josuah Sylvester's translation of a French devotional poem by Simon Goulart. Roger B. Stein finds that 'the poem is the central organizing element, the key to the picture—to its design, to the relationship of its parts to one another, and to its meaning both as individual work and as an artefact within its larger culture'.

Five other portraits have been attributed to Smith. Major Thomas Savage (1679) and Mrs Richard Patteshall and Child (1679) are both owned by the Museum of Fine Arts, Boston. Captain Richard Patteshall (private collection) was meant to hang with the portrait of his wife. Captain George Curwin (c. 1675) is owned by the Peabody Essex Museum in Salem, Massachusetts. The sitter of Portrait of a Man, probably Sir George Downing (1624–1684) has also been identified as Elisha Hutchinson.