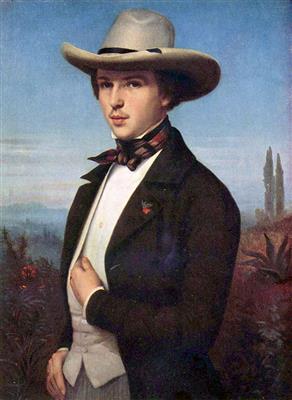 Oswald Achenbach (German: [ˈɔsvalt ˈʔaxn̩bax]; 2 February 1827 – 1 February 1905) was a German painter associated with the Düsseldorf school of painting. Though little known today, during his lifetime he was counted among the most important landscape painters of Europe. Through his teaching activities, he influenced the Kunstakademie Düsseldorf. His brother, Andreas Achenbach, who was twelve years older, was also among the most important German landscape painters of the 19th century. The two brothers were humorously called "the A and O of Landscapes" (a reference to their initials matching a common German reference to the Alpha and Omega).


Oswald Achenbach was the fifth of ten children. His parents were Herman and Christine (née Zülch). There was little about the family to suggest that it would produce two of the century's most important painters. Hermann Achenbach was employed in a series of jobs, including beer and vinegar brewer, guesthouse owner, and bookkeeper. During Oswald's early childhood, the family moved to Munich where he attended primary school for at least a short period. At exactly what point his family returned to Düsseldorf is not known.


In 1835, at the age of eight, Achenbach was enrolled in the elementary class of the Kunstakademie Düsseldorf (Art Academy). This was technically in violation of the Academy's bylaws, which required a minimum age of twelve. He continued there until 1841. He was a student in the elementary class, where he was instructed in the basics of drawing, and then spent a year in the architecture class. This also did not correspond to the normal curriculum as described in the bylaws. The reasons for Achenbach's treatment are not fully known. Possibly, the bylaws were in practice mere guidelines and exceptions were made often, or perhaps only for highly gifted students like Achenbach.


It is also not clear why Achenbach left the Academy in 1841. From his sketchbooks, we know that during this period he had undertaken intensive nature studies in the area around Düsseldorf.


In 1843, the sixteen-year-old Achenbach began a journey of several months through Upper Bavaria and North Tyrol during which he continued his nature studies. His earliest known works in oil also come from this period. In 1845. Achenbach undertook a journey with his friend and later student Albert Flamm to northern Italy. The paintings that Achenbach completed from this period predominantly consist of Italian landscape motifs.


Few of Achenbach's paintings from before 1850 survive today. However, those that do indicate that his early choices of subject matter and technique were heavily influenced by the ideas being taught at the art academies of the time. The influence of Johann Wilhelm Schirmer and Carl Rottman can be seen in these paintings. In the oil studies that Achenbach completed during these trips, he adhered very closely to the landscape and concerned himself with the details of the typical Italian vegetation. Architectural motifs and figures play a much smaller role than they would in his more mature work.


Until well into the 19th Century, artistic education in Germany and much of Europe was strongly influenced by the "Kunstakademien", or art academies. However, particularly in the 19th century, these academies had become extremely formal and rigid and were not very responsive to new artistic directions. The academies also organized the big art exhibitions, through which artists primarily sold their work. Artists whose styles were opposed to the ideas of the academies were not exhibited and therefore generally had very few opportunities to sell their work. At the beginning of the 19th century, individual artists and representatives of entire artistic movements began to stand in opposition to the culture and concepts of the Academies.