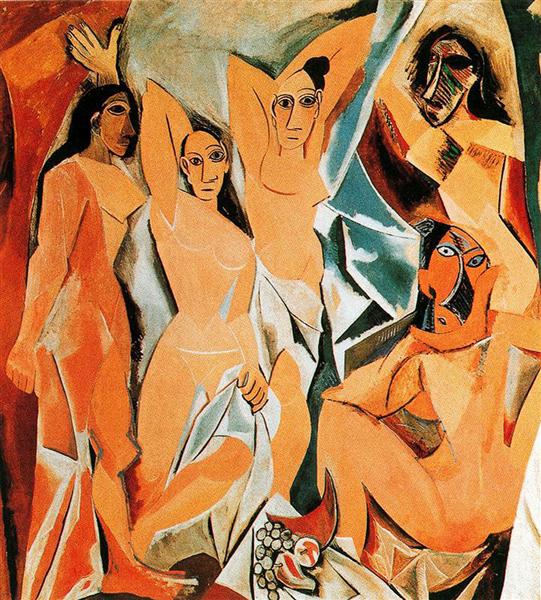 The girls of Avignon

Les Demoiselles d'Avignon (The Young Ladies of Avignon, originally titled The Brothel of Avignon) is a large oil painting created in 1907 by the Spanish artist Pablo Picasso. The work, part of the permanent collection of the Museum of Modern Art, portrays five nude female prostitutes in a brothel on Calle de Avinyó [es], a street in Barcelona. Each figure is depicted in a disconcerting confrontational manner and none is conventionally feminine. The women appear slightly menacing and are rendered with angular and disjointed body shapes. The three figures on the left exhibit facial features in the Iberian style of Picasso's native Spain, while the two on the right are shown with African mask-like features. The racial primitivism evoked in these masks, according to Picasso, moved him to "liberate an utterly original artistic style of compelling, even savage force."


In this adaptation of primitivism and abandonment of perspective in favor of a flat, two-dimensional picture plane, Picasso makes a radical departure from traditional European painting. This proto-cubist work is widely considered to be seminal in the early development of both cubism and modern art.


Les Demoiselles was revolutionary and controversial and led to widespread anger and disagreement, even amongst the painter's closest associates and friends. Matisse considered the work something of a bad joke yet indirectly reacted to it in his 1908 Bathers with a Turtle. Braque too initially disliked the painting yet perhaps more than anyone else, studied the work in great detail. And in fact, his subsequent friendship and collaboration with Picasso led to the cubist revolution. Its resemblance to Cézanne's The Bathers, Paul Gauguin's statue Oviri and El Greco's Opening of the Fifth Seal has been widely discussed by later critics.


At the time of its first exhibition in 1916, the painting was deemed immoral. The work, painted in Picasso's studio in the Bateau-Lavoir in Montmartre, Paris, was seen publicly for the first time at the Salon d'Antin in July 1916, at an exhibition organized by the poet André Salmon. It was at this exhibition that Salmon (who had already mentioned the painting in 1912 under the title Le Bordel philosophique) gave the work its current, less scandalous title, Les Demoiselles d'Avignon, instead of the title originally chosen by Picasso, Le Bordel d'Avignon. Picasso, who always referred to it as mon bordel ("my brothel"), or Le Bordel d'Avignon, never liked Salmon's title and would have instead preferred the bowdlerization Las chicas de Avignon ("The Girls of Avignon").


Picasso came into his own as an important artist during the first decade of the 20th century. He arrived in Paris from Spain around the turn of the century as a young, ambitious painter out to make a name for himself. Although he eventually left most of his friends, relatives and contacts in Spain, he continued to live and paint in Spain while making regular trips back to France. For several years he alternated between living and working in Barcelona, Madrid and the Spanish countryside, and made frequent trips to Paris.