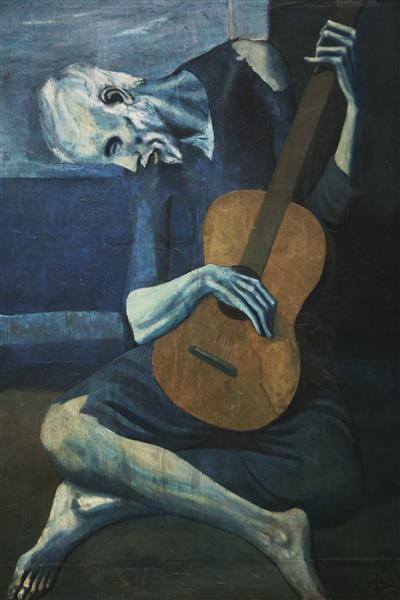 The Old Guitarist is an oil painting by Pablo Picasso created late 1903 – early 1904. It depicts an old, blind, haggard man with threadbare clothing weakly hunched over his guitar, playing in the streets of Barcelona, Spain. It is currently on display in the Art Institute of Chicago as part of the Helen Birch Bartlett Memorial Collection.


At the time of The Old Guitarist’s creation, Modernism, Impressionism, Post-Impressionism, and Symbolism had merged and created an overall movement called Expressionism which greatly influenced Picasso’s style. Furthermore, El Greco, Picasso’s poor standard of living, and the suicide of a dear friend influenced Picasso’s style at the time which came to be known as his Blue Period. Several x-rays, infrared images and examinations by curators revealed three different figures hidden behind the old guitarist.


At the time, having renounced his classical and traditional education and searching for fame, Picasso and his friend Carlos Casagemas moved to Paris. A year later, Casagemas became hopelessly miserable from a failed love affair and committed suicide. Picasso was greatly afflicted by this event and was soon depressed and desolate. In addition, Picasso was very poor. His poverty made him identify and relate to beggars, prostitutes and other downtrodden outcasts in society.


These events and circumstances were the impetus for the beginning of Picasso’s Blue Period which lasted from 1901 to 1904. The Blue Period is identified by the flat expanses of blues, greys and blacks, melancholy figures lost in contemplation, and a deep and significant tragedy. After the Blue Period came Picasso's Rose Period, and eventually the Cubism movement which Picasso co-founded.


Elements in The Old Guitarist were carefully chosen to generate a reaction from the spectator. For example, the monochromatic color scheme creates flat, two-dimensional forms that dissociate the guitarist from time and place. In addition, the overall muted blue palette creates a general tone of melancholy and accentuates the tragic and sorrowful theme. The sole use of oil on panel causes a darker and more theatrical mood. Oil tends to blend the colors together without diminishing brightness, creating an even more cohesive dramatic composition.


Furthermore, the guitarist, although muscular, shows little sign of life and appears to be close to death, implying little comfort in the world and accentuating the misery of his situation. Details are eliminated and scale is manipulated to create elongated and elegant proportions while intensifying the silent contemplation of the guitarist and a sense of spirituality. The large, brown guitar is the only significant shift in color found in the painting; its dull brown, prominent against the blue background, becomes the center and focus. The guitar comes to represent the guitarist’s world and only hope for survival. This blind and poor subject depends on his guitar and the small income he can earn from his music for survival. Some art historians believe this painting expresses the solitary life of an artist and the natural struggles that come with the career. Therefore, music, or art, becomes a burden and an alienating force that isolates artists from the world. And yet, despite the isolation, the guitarist (artist) depends on the rest of society for survival. All of these emotions reflect Picasso’s predicament at the time and his criticism of the state of society. The Old Guitarist becomes an allegory of human existence.