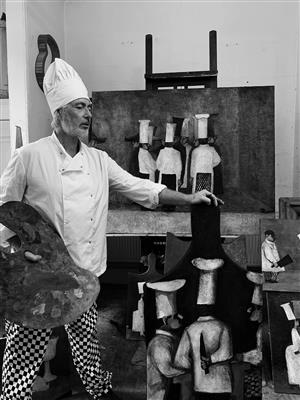 William Balthazar Rose is an English painter who lives in Sansepolcro, Tuscany and Bath, England. He works in a number of genres of which he is best known for his cooks depicted in “The Cook's Theatre” a group of paintings dedicated to the cook and deriving in concept from ideas concerning the Theatre of the Absurd. Rose has exhibited widely in the United States, England and Continental Europe alongside such artists as Howard Hodgkin, Wolf Kahn, Wayne Thiebaud, Luca Pignatelli, Adriano Alunni and Massimo Campigli. His work has been influenced by Cezanne, Balthus, Morandi and Goya in painting, and Fellini, Pasolini and Peter Greenaway in film.


William Balthazar Rose (born 1961) is an English painter living near Umbertide Italy and the city of Bath, England. He is the first son of artist parents Jasper Allison Rose and Jean Melville Rose. He works in a number of genres of which he is best known for his ‘Cooks’.


Since 1990 he devoted himself to painting, initially basing himself in San Francisco. His work was featured at the Campbell Thiebaud Gallery (later the Paul Thiebaud Gallery), San Francisco. He became acquainted with Dennis Hare, Christopher Brown, Anthony Dubovsky and other exponents of the Bay Area Figurative Movement. Wayne Thiebaud was one of the first painters to recognise his talents purchasing his work through his son Paul's Gallery.


Following in the footsteps of Balthus, he moved to Sansepolcro, Tuscany, the birthplace of Piero della Francesca in 2003. Rose has lived for several years in Bath while maintaining residences in Monte Santa Maria Tiberina, Umbria and Borgo Sansepolcro, Tuscany. Rose has exhibited widely in the United States, England and continental Europe (see below). His work has been deeply influenced by Cezanne, Chardin, Corot, Giorgio Morandi and Goya in painting, and Pasolini and Peter Greenaway in film.


Balthazar began painting the series that he calls ‘Cooks’ in 1991. The first examples were painted on small wooden panels and usually included a larger figure sitting to one side. Often inspired by medieval painting there is a comic quality to these painting which despite their origins in religious iconography speak of humanity’s eternal role as actors on the stage of life, sometimes play acting with great humour and other times acting out the gravest of tragedies. He has had solo shows alongside Howard Hodgkin and Wolf Kahn as well as group exhibitions with Alberto Sughi, Adriano Alumni, Mario Tozzi and Ottone Rosai.


His talents and inspiration have been widely recognised by critics and patrons alike, best summarised by the following extract from Peter Davies' essay on Rose in a recent catalogue for Brian Sinfield gallery:


William has paintings in private collections all over the world, and has been collected over a thirty-year period. Michel Roux Jr. has purchased several paintings and displays them in his Le Gavroche Restaurant in Mayfair, and his Roux at Parliament Square restaurant in Westminster. He has profiled William's work in the magazine Seasons. While Michel Roux, Jr. is a dedicated and serious art collector owning works by Matisse, Chagall and others, he named William Balthazar Rose as his favourite painter in a Country Life interview.