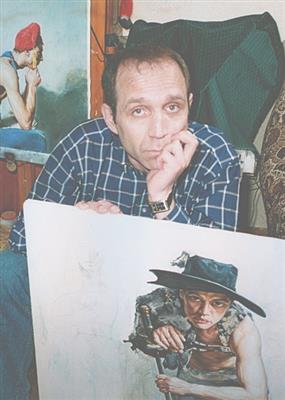 Iurie Matei (Moldova, 1968) paints in oil paint in a style reminiscent of the surrealism of Salvador Dali. In his works he uses an existing universal iconography, but at the same time he developed a personal symbolism, such as the pierced with a nail gnawed apple or toy clowns, grinning at the viewer to constantly appear. His work is narrative in any case, but sometimes melancholy. He cited in his pictures the great masters of art history. In his paintings, dreams Iurie Matei and holds up a mirror to all mankind. His works are in galleries, museums and major art events in Moscow, Kiev, Venice, Odessa, Prague, The Hague, Amsterdam, Ankara, Paris, Madrid, Bucharest, Budapest, Rome and Milan issued.

Iurie Matei was born on 11 March 1968 in the vicinity of Chisinau, the capital Moldova has already started very young to paint. He finished his studies in 1995 at the National Art Academy Moldova, where he was the greatest talent and where his teachers said, just as it once was the case with Picasso, he could no more of them . Learn In eastern Europe, his talent and his style of the great surrealist Salvador Dali compared.
His body of work is already very extensive. He has his own television station in the Moldovan government and also a program in Romania Television. He is also a costume and set designer in many theatrical and film productions involved. Meanwhile he is also a lecturer at the National Art Academy Moldova active.

His style is reminiscent of the famous surrealists. He paints Portraits, nudes, landscapes and cityscapes. His paintings are above all by a mysterious marked "surreal" content. His technique is very refined, you could compare it with the painting of fine painters, the complex still life. Like them he is a master in the depiction of various materials and proportions and of light and shadow.

His complex paintings, in which figure as Harlequins or Don Juan type, on which they answer, and stimulate the imagination at. Matei cited in his paintings casually and almost effortlessly details of paintings by old masters such as Jeroen Bosch and Albrecht Dürer. At the same time he understands the need to let his own symbols come to light, so his impressive body of work have been a convincing unit added.