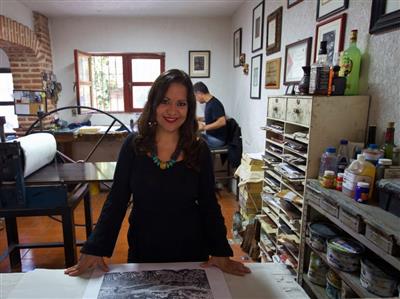 Marina Pallares is an active Mexican painter born in 1980. Her work focuses principally on magic realism accomplished via diverse pictorial and graphic techniques such as oil painting, linocut, and metal engraving.

Though her beginnings in the pursuit of art date back to the age of 11 - when she initiated her studies in the Visual & Plastic Arts at various art academies including the Cultural Cabañas Institute (Instituto Cultural Cabañas) and the José Clemente Orozco Center for Art Education at the National Institute of Fine Arts (Instituto Nacional de Bellas Artes, INBA) - it wasn’t until 19 years of age that she began exhibiting her work, in both collective and individual exhibitions. Since then, Marina Pallares has been an active and prolific painter following an uninterrupted trajectory in the field of Visual & Plastic Arts.

Already recognized for her skillful linocut prints, her artistic work was at first clearly associated with the Mexican School of Painting (Escuela Mexicana de Pintura). However, over time, she has been developing her own style, one that can best be described as magic realism. Her pieces reflect a love for nature and dreaming, carrying the viewer away with scenes in which different characters appear to be practicing magic or creating unknown worlds. In this way, an elderly man on a bicycle is capable of generating the sea from his very beard, or a solitary fisherman fishes by night for strange creatures in moonlit seas. Marina Pallares indefatigably searches out the font of creativity and an authentic language through which to express herself artistically.

Thanks to her first linocut prints, Marina Pallares was the youngest artist to be featured alongside such greats as José Clemente Orozco and Maria Izquierdo in the 2005 publication, Jaliscan Painting in the 20th Century (La Pintura Jalisciense en el Siglo XX, Guillermo Ramírez Godoy). Success first struck in 2001 with her initial individual exhibition, during which she immediately sold out of the entire collection on display. This led to radio and television interviews, more offers to exhibit her work, the increased interest of additional clients, and eventually her inclusion in the aforementioned book.