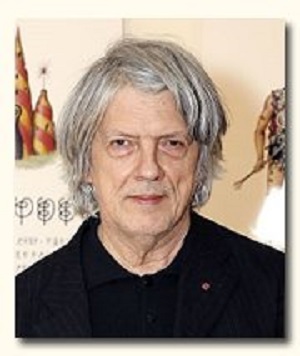 Luigi Serafini is an Italian artist and designer most famous for creating the "Codex Seraphinianus", an encyclopedia full of surrealist imagery from a fictional world, written entirely in a constructed language. The book was published in 1981. He worked as an architect in Milan during most of the 80's.

Luigi Serafini (born 4 August 1949 in Rome) is an Italian artist and designer. He is best known for creating the Codex Seraphinianus, an illustrated encyclopedia of imaginary things in what is believed to be a constructed language. This work was published in 1981 by Franco Maria Ricci, out of Milan.


During the 1980s Serafini worked as an architect and designer in Milan. His objects were often defined by a certain metalanguage aptitude, like the chairs Santa and Suspiral or the lamps and the glass for Artemide. He has created scenery, lighting and costumes for the ballet "The Jazz Calendar" by Frederick Ashton at Teatro Alla Scala and worked also for the Piccolo Teatro di Milano. He has done set designs for RAI, television acronyms/logos in computer graphics. He worked with Federico Fellini on La voce della luna, for which he developed early designs.


He has a laboratory of ceramics in Umbria, and continues to give touring personal exhibitions, especially in the Netherlands, and participate in art collectives. In 2003 he completed a polychrome bronze sculpture, "Carpe Diem" and other bas-reliefs for one of the Naples subway stations (Materdei).


In May 2007, he held an "ontological exhibition" Luna Pac in Milan at PAC in Milan. He occasionally gives interviews in Italian media and art publications.


Serafini has been a Banff Centre visiting artist, and has exhibited at the Fondazione Mudima di Milano, the XIII Quadriennale, the Galleria Nazionale d'Arte Moderna (National Gallery of Modern Art) in Rome, the Futurarium, and the Didael gallery.


The Codex Seraphinianus was originally released as in a limited edition of 5000 artfully-bound copies in 1981. It has been republished on five occasions, first in a 1983 English language edition; then in English, Spanish, and French editions in the 1990s, each again limited to 5000 copies; and finally in more widely printed editions in 2006 and 2013. In 2013, Serafini also released a deluxe, signed and numbered limited edition of 600, 300 in English and 300 in Italian.


Many other people have been inspired by the work. Roland Barthes was interested in the Codex. In 1984 Italo Calvino wrote an essay on it, which can be found in Collezione di sabbia (Sand Collection) by Mondadori. The French choreographer Philippe Decouflé was inspired by it. Douglas Hofstadter wrote about it at some length.


In a talk at the Oxford University Society of Bibliophiles held on 11 May 2009, Serafini stated that there is no meaning hidden behind the script of the Codex, which is asemic; that his own experience in writing it was closely similar to automatic writing; and that what he wanted his alphabet to convey to the reader is the sensation that children feel in front of books they cannot yet understand, although they see that their writing does make sense for grown-ups.


In 1984 Serafini illustrated Pulcinellopedia (piccola), under the pseudonym P. Cetrulo (published by Longanesi), with a suite of pencil drawings about the Neapolitan masque of Pulcinella. It was reprinted in 2016.