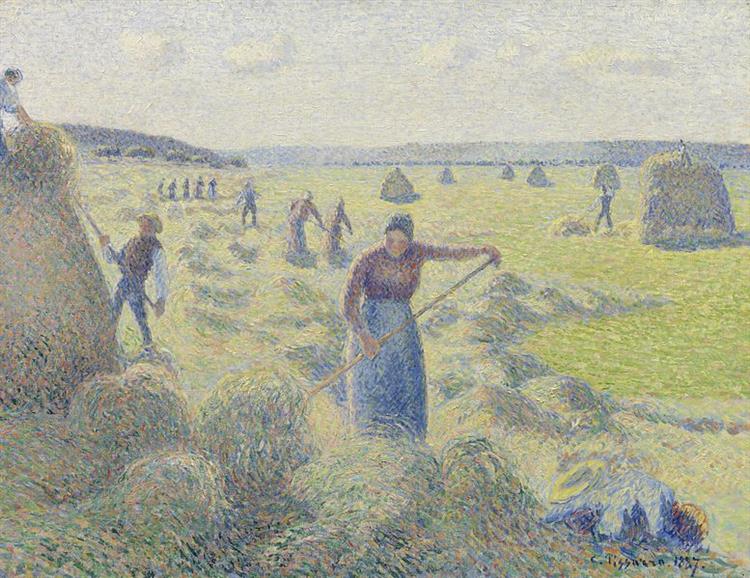 The Harvest of Hay in Eragny

This painting depicts a hay harvesting scene in the countryside near Éragny, where the artist lived with his family from 1884 until his death in 1903. In the center of the canvas, a woman uses a hayfork while behind her others do similar work in a brightly lit field punctuated by haystacks.

Pissarro adopted the Pointillist technique in 1886, saying that "Neo-Impressionism was the next phase in the logical march of Impressionism." What set his work apart from the other Neo-Impressionists was his emphasis on rural life and labor. Pissarro's depiction of peasant life along with his own scientific explorations of color speaks to the anarchist theories he adopted in the latter half of the 1870s.

Pissarro felt that his scientific studies freed him from the Academy's strictures of how to see and depict reality. He also evoked the utopian visions of peasant societies he read about in the writings of anarchists Pierre-Joseph Proudhon and Peter Kropotkin. Pissarro wanted "to educate the public," by portraying the common man, but he also wanted to avoid idealizing and sentimentalizing his subjects. In this work, he depicts the effort of hay harvesting, both in the man at the left arching his back to toss the hay up and in the woman at the center, the strength palpable in her back and shoulders.