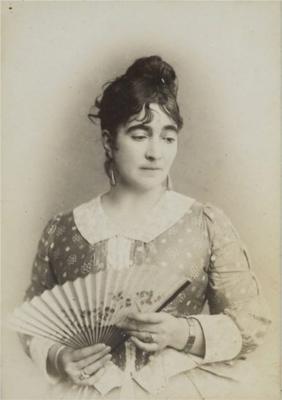 Marie Bracquemond (December 1, 1840 – January 17, 1916) was a French Impressionist artist, who was described retrospectively by Henri Focillon in 1928 as one of "les trois grandes dames" of Impressionism alongside Berthe Morisot and Mary Cassatt. Her frequent omission from books on artists is sometimes attributed to the efforts of her husband, Félix Bracquemond. Félix respected his wife's talents as an artist but disagreed fervently with her adaptation of Impressionist techniques, in particular her use of color.

She was born Marie Anne Caroline Quivoron on December 1, 1840 in Argenton-en-Landunvez, near Brest, Brittany. She did not enjoy the same upbringing or career as the other well-known female Impressionists – Cassatt, Morisot, Gonzalès. She was the child of an unhappy arranged marriage. Her father, a sea captain, died shortly after her birth. Her mother Aline Hyacinthe Marie Pasquiou quickly remarried to Émile Langlois, and thereafter they led an unsettled existence, moving from Brittany to the Jura, to Switzerland, and to Limousin, before settling in Étampes, south of Paris. She had one sister, Louise, born in 1849 while her family lived near Ussel (department Corrèze in Limousin) in the ancient abbey Notre-Dame de Bonnaigue.

She began lessons in painting in her teens under the instruction of M. Auguste Vassort, "an old painter who now restored paintings and gave lessons to the young women of the town". She progressed to such an extent that in 1857 she submitted a painting of her mother, sister and old teacher posed in the studio to the Salon which was accepted. She was then introduced to the painter Ingres who advised her and introduced her to two of his students, Flandrin and Signol. As a student in Ingres' private Parisian studio, she wrote that, “The severity of Monsieur Ingres frightened me… because he doubted the courage and perseverance of a woman in the field of painting… He would assign to them only the painting of flowers, of fruits, of still lives, portraits and genre scenes.” The critic Philippe Burty referred to her as "one of the most intelligent pupils in Ingres' studio". She later left Ingres' studio and began receiving commissions for her work, including one from the court of Empress Eugenie for a painting of Cervantes in prison. This evidently pleased, because she was then asked by the Count de Nieuwerkerke, the director-general of French museums, to make important copies in the Louvre.

It was while she was copying Old Masters in the Louvre that she was seen by Félix Bracquemond who fell in love with her. His friend, the critic Eugène Montrosier, arranged an introduction and from then, she and Félix were inseparable. They were engaged for two years before they married on August 5, 1869, despite her mother's opposition. In 1870 they had their only child, Pierre. Because of the scarcity of good medical care during the War of 1870 and the Paris Commune, Bracquemond's already delicate health deteriorated after her son's birth. Much of what is known of Bracquemond's personal life comes from an unpublished short biography authored by her son entitled La Vie de Félix et Marie Bracquemond.