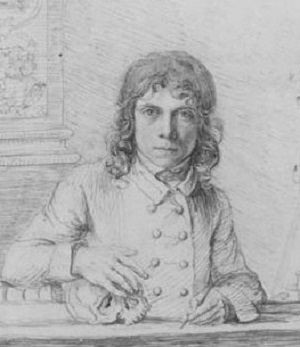 
John Flaxman RA (6 July 1755 – 7 December 1826) was a British sculptor and draughtsman, and a leading figure in British and European Neoclassicism. Early in his career he worked as a modeller for Josiah Wedgwood's pottery. He spent several years in Rome, where he produced his first book illustrations. He was a prolific maker of funerary monuments.


He was born in York. His father, also named John (1726–1803), was well known as a moulder and seller of plaster casts at the sign of the Golden Head, New Street, Covent Garden, London. His wife's maiden name was Lee, and they had two children, William and John. Within six months of John's birth the family returned to London. He was a sickly child, high-shouldered, with a head too large for his body. His mother died when he was nine, and his father remarried. He had little schooling, and was largely self-educated. He took delight in drawing and modelling from his father's stock-in-trade, and studied translations from classical literature in an effort to understand them.


His father's customers helped him with books, advice, and later with commissions. Particularly significant were the painter George Romney, and a cultivated clergyman, Anthony Stephen Mathew and his wife Mrs. Mathew, in whose house in Rathbone Place the young Flaxman used to meet the best "blue-stocking" society of the day and, among those his own age, the artists William Blake and Thomas Stothard, who became his closest friends. At the age of 12 he won the first prize of the Society of Arts for a medallion, and exhibited in the gallery of the Free Society of Artists; at 15 he won a second prize from the Society of Arts showed at the Royal Academy for the first time. In the same year, 1770, he entered the Academy as a student and won the silver medal. In the competition for the gold medal of the Academy in 1772, however, Flaxman was defeated, the prize being awarded by the president, Sir Joshua Reynolds, to a competitor named Engleheart. This episode seemed to help cure Flaxman of a tendency to conceit which led Thomas Wedgwood V to say of him in 1775, "It is but a few years since he was a most supreme coxcomb."


He continued to work diligently, both as a student and as an exhibitor at the Academy, with occasional attempts at painting. To the Academy he contributed a wax model of Neptune (1770); four portrait models in wax (1771); a terracotta bust, a wax figure of a child, an historical figure (1772); a figure of Comedy; and a relief of a Vestal (1773). During this period he received a commission from a friend of the Mathew family for a statue of Alexander the Great, but he was unable to obtain a regular income from private contracts.


From 1775 he was employed by the potter Josiah Wedgwood and his partner Bentley, for whom his father had also done some work, modelling reliefs for use on the company's jasperware and basaltware. The usual procedure was to model the reliefs in wax on slate or glass grounds before they cast for production. D'Hancarville's engravings of Sir William Hamilton's collection of ancient Greek vases were an important influence on his work.