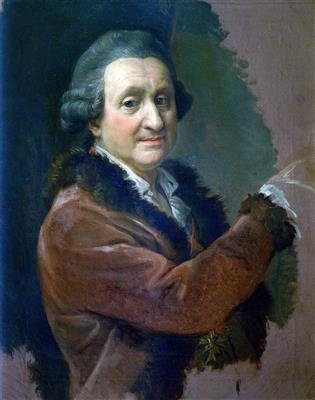 Pompeo Girolamo Batoni (25 January 1708 – 4 February 1787) was an Italian painter who displayed a solid technical knowledge in his portrait work and in his numerous allegorical and mythological pictures. The high number of foreign visitors travelling throughout Italy and reaching Rome during their "Grand Tour" made the artist specialize in portraits. Batoni won international fame largely thanks to his customers, mostly British of noble origin, whom he portrayed, often with famous Italian landscapes in the background. Such Grand Tour portraits by Batoni were in British private collections, thus ensuring the genre's popularity in Great Britain. One generation later, Sir Joshua Reynolds would take up this tradition and become the leading English portrait painter. Although Batoni was considered the best Italian painter of his time, contemporary chronicles mention his rivalry with Anton Raphael Mengs.


In addition to art-loving nobility, Batoni's subjects included the kings and queens of Poland, Portugal and Prussia, the Holy Roman Emperors Joseph II and Leopold II (a fact which earned him noble dignity), as well the popes Benedict XIV, Clement XIII and Pius VI, Elector Karl Theodor of Bavaria and many more. He also received numerous orders for altarpieces for churches in Italy (Rome, Brescia, Lucca, Parma, etc.), as well as for mythological and allegorical subjects.


Batoni's style took inspiration and incorporated elements of classical antiquity, French Rococo, Bolognese classicism, and the work of artists such as Nicolas Poussin, Claude Lorrain and especially Raphael. As such Pompeo Batoni is considered a precursor of Neoclassicism.


Pompeo Batoni was born in Lucca, the son of a goldsmith, Paolino Batoni. He moved to Rome in 1727, and apprenticed with Agostino Masucci, Sebastiano Conca and/or Francesco Imperiali (1679–1740).


Batoni owed his first independent commission to the rains that struck Rome in April 1732. Seeking shelter from a sudden storm, Forte Gabrielli di Gubbio, count of Baccaresca took cover under the portico of the Palazzo dei Conservatori on the Capitoline Hill. Here the nobleman met the young artist who was drawing the ancient bas-reliefs and the paintings of the staircase of the palace. Impressed by his skill and the purity of the design, Gabrielli asked Batoni to see some of his works, and when conducted to the painter's studio he was so awed by his talent that he offered him to paint a new altarpiece for the chapel of his family in San Gregorio Magno al Celio, the Madonna on a Throne with Child and four Saints and Blesseds of the Gabrielli family (1732–33), a second version of which (1736) is now at the Gallerie dell'Accademia in Venice. The Gabrielli Madonna obtained general admiration and by the early 1740s Batoni started to receive other independent commissions. His celebrated painting, The Ecstasy of Saint Catherine of Siena (1743) illustrates his academic refinement of the late-Baroque style. Another masterpiece, his Fall of Simon Magus was painted initially for the St Peter's Basilica.


Batoni became a highly-fashionable painter in Rome, particularly after his rival, the proto-neoclassicist Anton Raphael Mengs, departed for Spain in 1761. Batoni befriended Winckelmann and, like him, aimed in his painting to the restrained classicism of painters from earlier centuries, such as Raphael and Poussin, rather than to the work of the Venetian artists then in vogue. Commenting on Batoni, the art historians Boni and de Rossi said of Batoni and Mengs the other prominent painter in Rome during the second half of the 18th century, that Mengs was made painter by philosophy: Batoni by nature...(Batoni) was more painter than philosopher, (Mengs) more philosopher than painter. In 1741, he was inducted into the Accademia di San Luca.