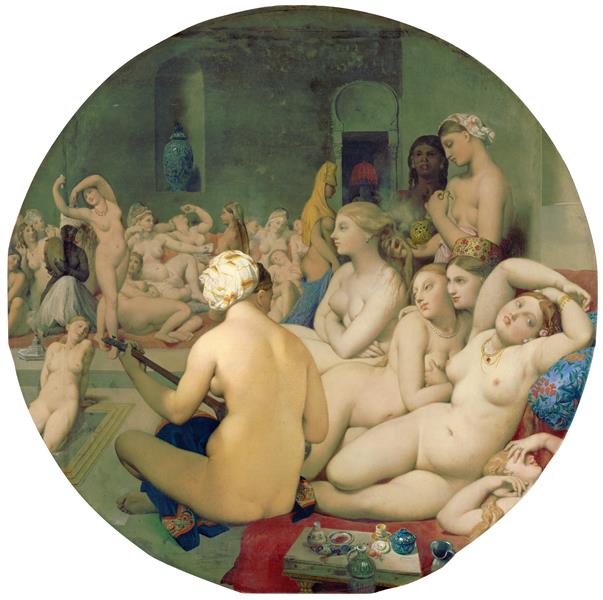 The work is signed and dated 1862, when Ingres was around 82 years old, and was completed in 1863. In that year Ingres altered the painting's original rectangular format, and cut the painting to its present tondo form. Photographs of the painting in its original format survive.

It seems based on an April 1717 written description of a Turkish harem by Lady Mary Wortley Montagu, where she mentions having viewed some two hundred nude women. The painting develops and elaborates a number of motifs Ingres had explored in earlier paintings, in particular his 1808 The Valpinçon Bather and Grande Odalisque of 1814.

The painting is known for its subtle colourisation, especially the very pale skin of the women resting in the privacy of a bathing area. The figures are given an almost abstract and "slender and sinuous" form, and seem at times to lack skeleton. They are arranged in a very harmonious, circular manner, a curved arrangement that heightens the eroticism of the painting. Its charge is in part achieved through the use of motifs that include the implied haze of Oriental perfume, and the inclusion of vases, running water, fruit and jewels, as well as a palette than ranges from pale white to pink, ivory, light greys and a variety of browns.

The figure from his The Valpinçon Bather appears almost identically as the central element of the later composition, but now plays a mandolin. The woman in the background with her arm extended and holding a cup of coffee resembles the sitter in his 1856 portrait of Marie-Clotilde-Inès Moitessier. The face of the woman with her arms raised above her head in the near right is similar to an 1818 croquis of the artist's wife, Delphine Ramel, though her right shoulder is lowered whereas her right arm is raised (an anatomical inconsistency usual in Ingres's work – La Grande Odalisque has three additional vertebrae). The other bodies are juxtaposed in various unlit areas behind them.

Ingres's draws from a wide variety of painterly sources, including 19th-century academic art, Neoclassicism and late Mannerism. While at first look the painting might seem like a corporeal descent into wild abandon, it is in actuality very still, precise and geometrical throughout. The colourisation is one of "chastising coolness", while figures merge into each other in a manner that evokes sexuality, but ultimately is intended to show his skill at defying rational perspective Ingres invokes a setting that is both very real and only imaginary.