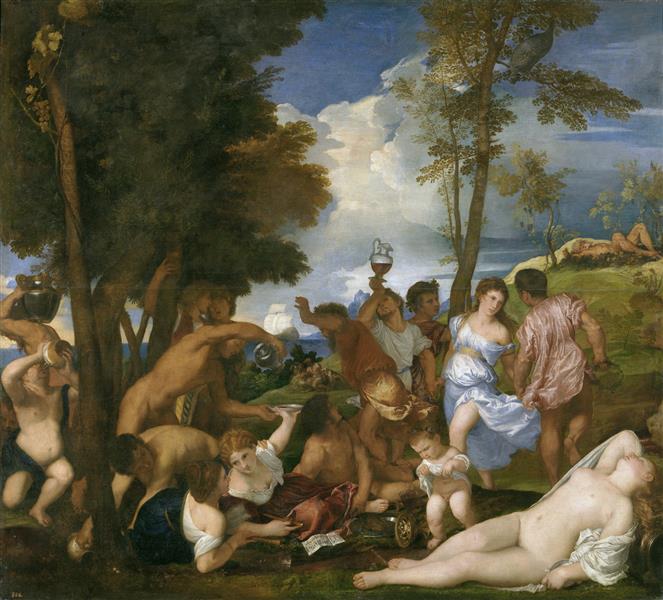 The Bacchanal of the Andrians

This colorful figure painting is one of a series of Roman mythological works commissioned by Alfonso I d'Este, Duke of Ferrara, for his palace at Ferrara. It was part of a group of three painted by Titian between 1518 and 1525. The other two are Worship of Venus (1518-1519) and Bacchus and Ariadne (1520-1523). It stemmed from the Roman writer Philostratus, who left a collection of descriptions of pictures under the title "Imagines." One concerned the visit of Bacchus and his entourage of satyrs and bacchantes to the island of Andros. There, the natives were blessed by the presence of a river of wine. Upon the suggestion of his patron, Alfonso d'Este, Duke of Ferrara, who wanted works to decorate his private studiolo, Titian reconstructed the classical narrative in this masterpiece.

The scene is set on the island of Andros, where the followers of Bacchus await his arrival in varying stages of inebriation, as they drink from the island's river of wine. Bacchus himself is not present, but his ship can be seen in the distance. Meantime, gods, men, and children celebrate the sublime effects of wine, whose consumption, according to Philostratus, makes men dominant, rich, generous to their friends, handsome and tall beyond their dreams. If Philostratus' description was sparse, this painting is riotously full of detail and incident, and only Titian could create, at the center of the scene, the brilliant and unforgettable emblem of this Bacchic setting. Silhouetted against the sky, a dancing youth holds a glass wine jug. He looks up, like an astronomer, at this sun and moon of his inebriated universe. A debate about balance and the horizontal is conducted by the clear vessel, tilted, and the equator of wine that it contains. Beneath such a heavenly body, the earth will be drunk and inspiring too.

With the coming of dawn on Andros, the river god, instead of adopting his canonical reclining position, remains a lie-a-bed in his mulch of vines (top-right). The wine-red stream has also left the nymph in the foreground - based on a classical statue of Ariadne - to her erotic slumbers, as undisturbed by the singing, dancing, and drinking that continue among the elaborately interwoven throng as by Apollo's call. Titian also deviated from the original text by creating two immigrants to Andros. They are the two courtly young women reclining in the center foreground amid a litter of overturned vessels of various sorts, indicating abandon. The girl in red has had her attentions to the nude youth (deriving from a figure in Michelangelo's Battle of Cascina) interrupted by her companion. In contrast, he has been distracted by the dancer in ochre. Now, in close conversation, the girls do not engage directly with those about them as, with lingering gestures, they lay aside the shepherds' pipes, which, in more than one sense, they have been playing. Their tune, on the paper, is now taken up by the singers standing among the trees behind them. These music-makers are to be distinguished from the Andrians - fellow mortals - and from the spirits and deities that occupy the place. It may be understood that the immortals, and indeed the Andrians themselves, have been conjured up in the imagination by the girls, or else that - sensitive to the spirit of the scene and the effects of wine - they are rewarded by the attentions of beings who await the call of mortals' music and imagination.

Other figures also allude to classical statuary. The maenad (female follower of Dionysus, the Greek god of wine) dressed in white, is a reference to the sculpture of an antique torso in the Grimani collection, while the male nude pouring wine on the left appears to be a reworking of The Wounded Gaul, a work of Hellenistic art unearthed in Rome around 1515 and probably known to Titian through a drawing.

Titian called this type of picture a poesie. It is the creation of the artist, and it addresses its audience as does a poem, allusively - inviting a meditation, a reverie, an engagement of sensibility, and never arriving at a definitive meaning.

The Bacchanal of the Andrians is an oil painting by Titian. It is signed "TICIANUS F.[aciebat]" and is dated to 1523–1526.

The painting is now held at the Museo del Prado in Madrid, but it was commissioned by Alfonso I d'Este for his Camerini d'alabastro ('chambers of alabaster') in Ferrara. The decorative programme included other major paintings celebrating Bacchus and Venus, the gods of wine and love.

The Bacchanal of the Andrians has been admired by other artists including Rubens who copied it.