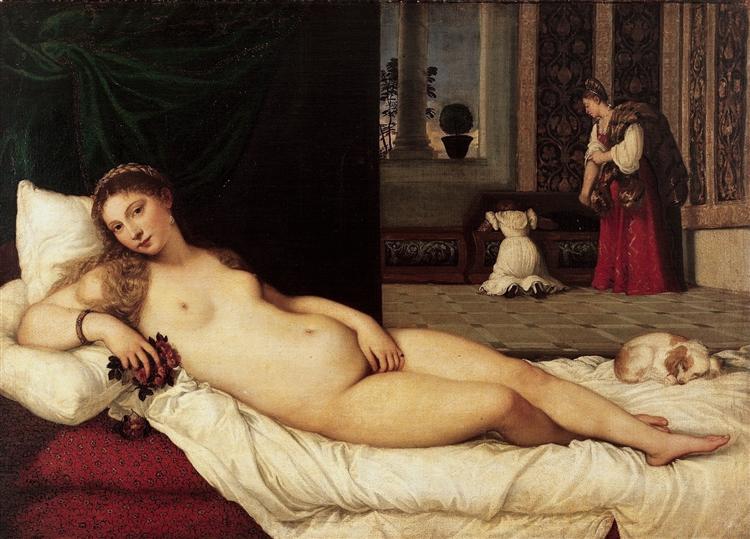 One of the greatest Renaissance paintings of a mythological nature, the life-size Venus of Urbino remains the iconic version of the reclining female nude, and a treasure of the Venetian High Renaissance. The picture was based on the earlier work The Sleeping Venus (1510) by Giorgione, a close friend of the artist, although Titian's interpretation of the goddess is much more erotic. This sensuality is heightened by the directness of the nude's gaze, her faint smile, and her awareness of the viewer, along with the depiction of her in an opulent domestic environment without the allegorical or mythological symbols traditionally associated with Venus. While Giorgione's nude is idealized and demure, Titian's is realistic and tempting. The warm, light tones of her skin are in contrast to the darker, more affluent background, and the play of light on her body and subtle use of chiaroscuro gives a sculptural quality to the nude. Her curves also contrast with the regularity of architectural elements, including the tiled floor, classical column, and green hanging, which bisects the scene, highlighting the fertile center of the figure.

Titian's exceptional talent, his bold depiction of female sensuality, and his status as the leading Venetian painter of the Cinquecento is why this picture is often cited as the origin of many of Western art's most controversial images - including, for instance, The Nude Maja (c.1797) by Goya, as well as Olympia (1863) by Edouard Manet - and is considered to be the original precursor to the pin-up.

The Venus of Urbino is full of artistic devices. To begin with, Titian achieves a beautiful contrast between the voluptuous curves of the girl's body and the vertical and horizontal lines of the dividing screen, floor tiles, and other architectural elements. The play of light on the girl's body and Titian's delicate chiaroscuro lends a sculptural quality to her figure and also enhances the silky drapery of the bedsheets. The floor tiles provide an extra linear perspective, while the floral patterns of the couch, cassoni, and background tapestry - in conjunction with the rich color pigments of the screen and the maid's costume - help to unify and activate the composition.

By the time he executed this work, Titian was established as the leading master of Renaissance art in Venice. Above all, he was known for his remarkable use of color, and his works - which spanned all the major genres, including church altarpieces, mythological painting, portrait art, and pastoral landscape - were increasingly sought after by members of Italian Royal Houses. He went on to become recognized as a genius in his own time and has since been revered by such Old Masters as Van Dyck, Poussin, Rubens and Velazquez. In many subjects and painting genres, he set patterns that were copied by generations of painters, especially in portraiture. Unfortunately, his talent as an artist was not matched by his generosity of spirit: he became notorious for his greed and miserliness.

The Venus of Urbino (also known as Reclining Venus) is an oil painting by the Italian painter Titian, which seems to have been begun in 1532 or 1534, and was perhaps completed in 1534, but not sold until 1538. It depicts a nude young woman, traditionally identified with the goddess Venus, reclining on a couch or bed in the sumptuous surroundings of a Renaissance palace. It is now in the Galleria degli Uffizi in Florence.

Interpretations of the painting fall into two groups. Both agree that the painting has a powerful erotic charge, but beyond that it is seen either as a portrait of a courtesan, perhaps Zaffetta, or as a painting celebrating the marriage of its first owner (who according to some may not have commissioned it). This disagreement forms part of a wider debate on the meaning of the mainly Venetian tradition of the reclining female nude, which Titian had created, or helped to create, some 25 years before with the Dresden Venus of around 1510-11. For Charles Hope, "It has yet to be shown that the most famous example of this genre, Titian's Venus of Urbino, is anything other than a representation of a beautiful nude woman on a bed, devoid of classical or even allegorical content." Even the indefatigable finder of allegories drawing on Renaissance Neoplatonism, Edgar Wind, had to admit that in this case "an undisguised hedonism had at last dispelled the Platonic metaphors".

The Venus stares straight at the viewer, unconcerned with her nudity. In her right hand she holds a posy of roses whilst she holds her other hand over her genitals. In the near background is a dog, often a symbol of fidelity. In a different space in the background two maids are shown rummaging through a cassone chest, where clothes were kept.

The detailed depiction of the interior setting is unusual, perhaps unique, in Titian. Titian contr32 for the 21 year old Ippolito de' Medici, reluctantly made a cardinal (though not a priest), by his uncle, Pope Clement VII. He was trying to pursue a military career, and was a papal diplomat. On 20 October 1532 he spent the night in Venice with Angela del Moro, or Angela Zaffetta, a leading courtesan in Venice and sometimes a dining companion of Titian and Aretino, the latter a friend of the cardinal. Titian painted Ippolito's portrait, and it seems likely that he was asked to add a nude portrait of Angela Zaffetta, or that Titian decided to paint one in the hope he would like it.

On 20 December 1534 Titian wrote to Ippolito's chamberlain in Rome saying that he had been working on a painting of a woman for the cardinal. Ippolito died in August 1535, and apparently never saw the painting, which was still Titian's studio when Guidobaldo II della Rovere, the 24-year-old son of the Duke of Urbino came in January 1538 to sit for a portrait. As letters from him and his mother show, he was extremely keen to buy it, and did so some months later; he refers to it simply as "the nude woman", and was worried Titian would sell it to someone else. Later that year he inherited the Duchy of Urbino on the death of his father, hence the painting acquired the name by which it is usually known, although it seems it was mostly kept in Pesaro from early on.