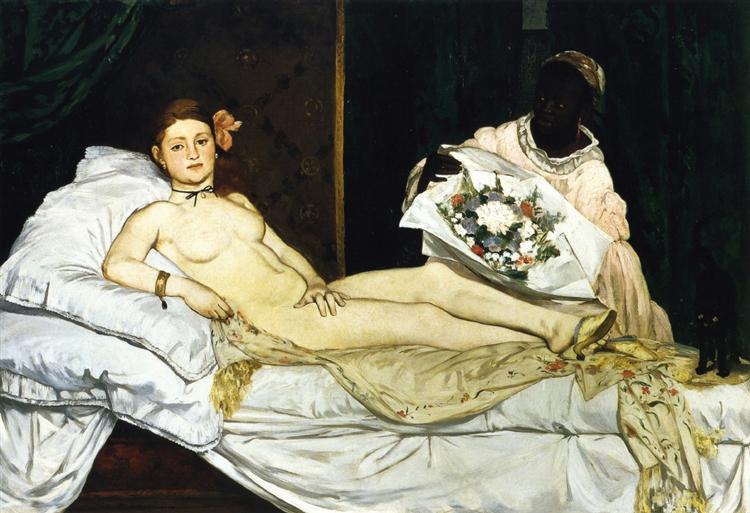 When Manet exhibited Olympia at the Paris Salon in 1865, it caused an immediate sensation. Although it was immediately condemned as “immoral” and “vulgar” by conservative critics, it was lauded by critics such as Emile Zola, the French writer, who proclaimed the painting to be Manet’s masterpiece. Unlike Titian’s Venus de Urbino or Giorgione’s Sleeping Venus, both of which were sources of inspiration for Olympia, Manet’s work was overtly sexual. The small bits of clothing, such as the orchid in her hair, jewelry, and the mule slippers, in addition to the fully clothed servant, seem to make the figure seem even more nude. Her confrontational gaze was an affront to the perfunctory modesty with which women were supposed to behave.

Olympia is a painting by Édouard Manet, first exhibited at the 1865 Paris Salon, which shows a nude woman ("Olympia") lying on a bed being brought flowers by a servant. Olympia was modelled by Victorine Meurent and Olympia's servant by the art model Laure. Olympia's confrontational gaze caused shock and astonishment when the painting was first exhibited because a number of details in the picture identified her as a prostitute. The French government acquired the painting in 1890 after a public subscription organized by Claude Monet. The painting is on display at the Musée d'Orsay, Paris.

What shocked contemporary audiences was not Olympia's nudity, nor the presence of her fully clothed maid, but her confrontational gaze and a number of details identifying her as a demi-mondaine or prostitute. These include the orchid in her hair, her bracelet, pearl earrings and the oriental shawl on which she lies, symbols of wealth and sensuality. The black ribbon around her neck, in stark contrast with her pale flesh, and her cast-off slipper underline the voluptuous atmosphere. "Olympia" was a name associated with prostitutes in 1860s Paris.

The painting is modelled after Titian's Venus of Urbino (1538). Whereas the left hand of Titian's Venus is curled and appears to entice, Olympia's left hand appears to block, which has been interpreted as symbolic of her sexual independence from men and her role as a prostitute, granting or restricting access to her body in return for payment. Manet replaced the little dog (symbol of fidelity) in Titian's painting with a black cat, which traditionally symbolized prostitution. Olympia disdainfully ignores the flowers presented to her by her servant, probably a gift from a client. Some have suggested that she is looking in the direction of the door, as her client barges in unannounced.

The painting deviates from the academic canon in its style, characterized by broad, quick brushstrokes, studio lighting that eliminates mid-tones, large color surfaces and shallow depth. Unlike the smooth idealized nude of Alexandre Cabanel's La naissance de Vénus, also painted in 1863, Olympia is a real woman whose nakedness is emphasized by the harsh lighting. The canvas alone is 51.4 x 74.8 inches, which is rather large for this genre-style painting. Most paintings that were this size depicted historical or mythological events, so the size of the work, among other factors, caused surprise. Finally, Olympia is fairly thin by the artistic standards of the time and her relatively undeveloped body is more girlish than womanly. Charles Baudelaire thought thinness more indecent than fatness.

The model for Olympia, Victorine Meurent, became an accomplished painter in her own right.

In part, the painting was inspired by Titian's Venus of Urbino (c. 1538), which in turn refers to Giorgione's Sleeping Venus (c. 1510). Léonce Bénédite was the first art historian to explicitly acknowledge the similarity to the Venus of Urbino in 1897. There is also some similarity to Francisco Goya's La maja desnuda (c. 1800).

There were also pictorial precedents for a nude woman, attended by a black servant, such as Ingres' Odalisque with a Slave (1842), Léon Benouville's Esther with Odalisque (1844) and Charles Jalabert's Odalisque (1842). Comparison is also made to Ingres' Grande Odalisque (1814). Unlike other artists, Manet did not depict a goddess or an odalisque but a high-class prostitute waiting for a client.