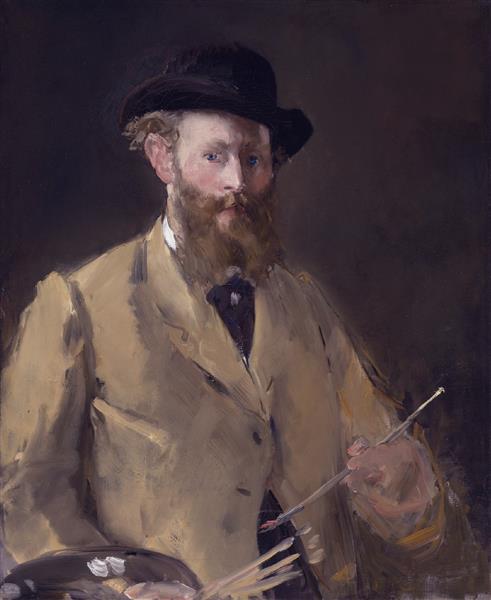 Self Portrait with a Palette

Although Manet often painted himself into his scenes, this self-portrait is one of only two of just the artist himself. The painting, which was painted in the style of Diego Velazquez self-portrait in Las Meninas, portrays the artist in a brown coat and cap, paint brush and palette in hand. Although the painting shows the brush in the left hand, we can assume that it was mirror image, as Manet was right handed. X-ray analysis of this work has shown that Manet painted over a portrait of his wife, Suzanne Leenhoff (Manet), in profile. This is the only self-portrait in which Manet depicted himself as an artist, as he has included himself in many of his other paintings, albeit as a figure in the scene, as in Music in the Tuileries and The Ball of the Opera.

Self-Portrait with Palette (French: Autoportrait à la palette) is an 1878–79 oil-on-canvas painting by the French artist Édouard Manet. This late impressionistic work is one of his two self-portraits. Velasquez's self-portrait in Las Meninas was a particular inspiration for Manet's painting which despite its allusion to the previous artist's work is very modern in its focus upon the personality of the artist and loose paint handling.

A long series of prominent collectors have owned this painting. Most recently, it sold for $29.48 million at Sotheby's on 22 June 2010.

The 83 × 67 cm (33 × 26 in) painting shows a half-length portrait of the painter Édouard Manet. In this self-portrait as painter he depicted himself as a stylish Boulevardier in front of a dark background. The depicted wears a black top hat and a brown jacket, under which is a white shirt, of which only the collar can be seen. The neckline of the suit jacket covers a black silk tie which is affixed by a tie pin. In the right, only vaguely depicted hand he holds a long wooden brush with red paint on the tip; the left hand holds a painting palette with about three more brushes. No further accessories are shown. The figure is lit from the left by which the shadows beneath the left arm and the right half of the face are created. His pose is slightly turned to the right, so that the right half of the body is darker than the forward, left half. The painter's gaze is directed forwards at the viewer.

Because Manet was almost certainly not left-handed, the painting is a mirror image.

As has been established by X-ray analysis, Manet painted his Self-Portrait with Palette over a portrait in profile of his wife Suzanne Manet. In this picture she was depicted in a pose similar to that in the painting Madame Manet at the Piano (1868, Musée d'Orsay).

The dating of the painting goes back to Manet's friend Théodore Duret, who asked Léon Leenhof, the son of Manet's wife, about it after the painter's death. Moreover, Manet had used the same suit jacket that he wore in Self-Portrait with Palette in the painting At "Père Lathuille" (also from 1879), for the depiction of the son of the restaurant's owner.

Las Meninas, in which Diego Velázquez depicted himself in a similar pose with brush and palette, is considered an important precedent for the Self-Portrait with Palette. There the painter stands almost in the background of his studio, while his models, the five-year-old Margarita Teresa of Spain and her servants, occupy the foreground. From here Manet appropriated the pose of the painter and his equipment, but as opposed to Velázquez, he makes himself the thematic center of the image. At the same time, however, he is working on a painting, but leaves its subject matter, as well as his surroundings, to the imagination of the viewer. Manet himself between 1865 and 1870 portrayed Velázquez in a studio scene in which the Spanish painter is posed similarly to his self-portrait.