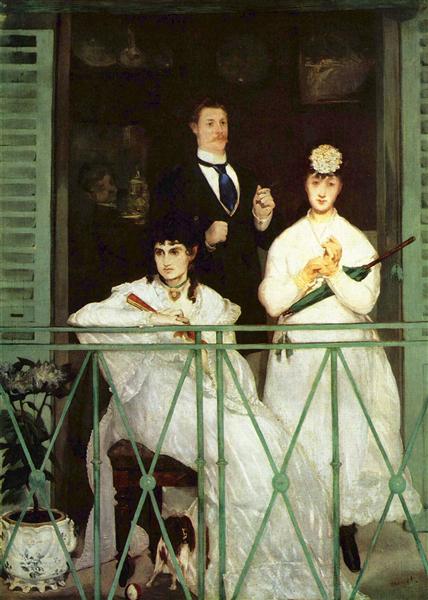 The Balcony (French: Le balcon) is an 1868-69 oil painting by the French painter Édouard Manet. The painting depicts four figures on a balcony, one sitting and the others standing. Seated on the left is the painter Berthe Morisot, who became the wife of Manet's brother, Eugène in 1874. In the centre is the painter Jean Baptiste Antoine Guillemet. On the right is Fanny Claus, a violinist. The fourth figure, partially obscured in the interior's background, is possibly Léon Leenhoff, Manet's son. It was exhibited at the Paris Salon of 1869, and then kept by Manet until his death in 1883. It was sold to the painter Gustave Caillebotte in 1884, who left it to the French state in 1894. It is currently held at the Musée d'Orsay, in Paris.

The painting, inspired by Majas on the Balcony (fr) by Francisco Goya, was created at the same time and with the same purpose as Luncheon in the Studio.

The three characters, who were all friends of Manet, seem to be disconnected from each other: while Berthe Morisot, on the left, looks like a romantic and inaccessible heroine, the young violinist Fanny Claus and the painter Antoine Guillemet seem to display indifference. The boy in the background is probably Manet's son, Léon. Just behind the railings, there are a hydrangea in a ceramic pot, and a dog with a ball below Morisot's chair.

This was the first portrait of Morisot by Manet. Manet adopts a retrained colour palette, dominated by white, green and black, with a accents of blue (Guillemet's tie) and red (Morisot's fan).

Manet made many preparatory studies, painting the four subjects individually many times: Guillemet as many as fifteen times. A preparatory study for The Balcony was painted at Boulogne in 1868. This unfinished portrait of Fanny Claus, the closest friend of Manet’s wife Suzanne Leenhoff; Claus married Manet's friend Pierre Prins in 1869. The work was bought after Manet's death in a studio sale by John Singer Sargent. The portrait had only been seen once in public since it was first painted in 1868, but in 2012 the Ashmolean Museum in Oxford succeeded in raising the funds to acquire it and keep it permanently in a public collection in the United Kingdom.

The painting was not well received when it was exhibited at the Paris Salon in 1869. The aggressive and bold green of the balcony rails drew much attention, as evidenced by the article devoted to the work by the Grand dictionnaire universel du XIXe siècle in 1878 which stated: "This painting was exhibited at the Salon of 1869 and is one of those who contributed to form this reputation for eccentricity realistic, this reputation of bad taste that was attached to Mr. Manet." The press considered the painting as "discordant". The contrast of colours (the background completely black, the white faces and clothes, the blue tie of the man, and the green railings) contributes to create an atmosphere of "mystery".

Manet deliberately eschewed any sense of connection between the figures, treating them more like objects in a still life than living people. None of them looks at the others. One commentator, the caricaturist Cham, sarcastically called for the shutters to be closed. Morisot herself said "Je suis plus étrange que laide; il paraît que l'épithète de femme fatale a circulé parmi les curieux ("I look more peculiar than ugly; it seems that people asking about it have used the words femme fatale to describe me."). Albert Wolff described it as "coarse art"" at "the level of house painters".