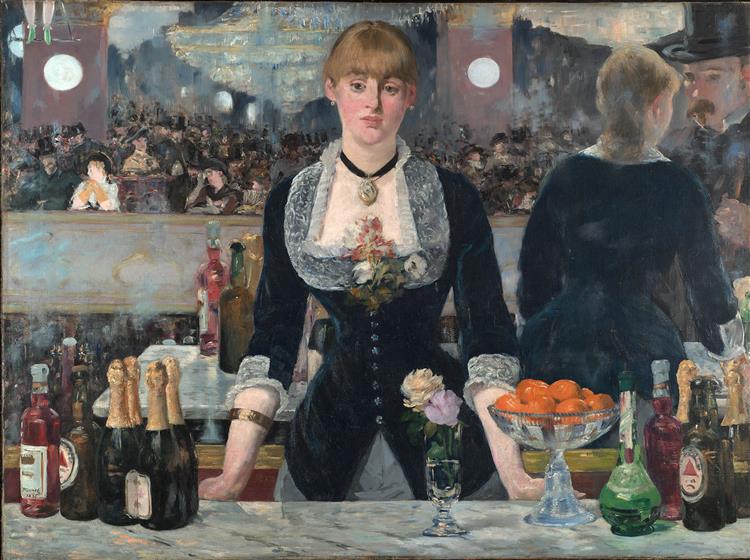 A Bar at the Folies-Bergere

This painting, depicting a scene at the Folies-Bergere nightclub in Paris, is considered Manet’s last major work. It can also be seen as early twentieth century product placement, with the beers in the foreground on the bar, which are clearly Bass Pale Ale. As England’s first registered trademark, this indicated an English clientele at the bar that night. There has also been much commentary on the composition of the painting, which at first seems to be a mirror image of the girl in the background. Upon closer inspection, however, it is obvious that the placement is incorrect, that it cannot be a mirror image. Other conjectures include that the woman in the foreground is the illustration of what the man in the background is seeing upon approaching the bar.

A Bar at the Folies-Bergère (French: Un bar aux Folies Bergère), painted and exhibited at the Paris Salon in 1882, is considered the last major work of French painter Édouard Manet. It depicts a scene in the Folies Bergère nightclub in Paris. The painting originally belonged to the composer Emmanuel Chabrier, who was Manet's neighbor. Chabrier hung it over his piano. The painting is currently in The Courtauld Gallery in London, England.

The painting exemplifies Manet's commitment to Realism in its detailed representation of a contemporary scene. Many features have puzzled critics but almost all of them have been shown to have a rationale, and the painting has been the subject of numerous popular and scholarly articles.

The central figure stands before a mirror, although critics—accusing Manet of ignorance of perspective and alleging various impossibilities in the painting—have debated this point since the earliest reviews were published. In 2000, however, a photograph taken from a suitable point of view of a staged reconstruction was shown to reproduce the scene as painted by Manet. According to this reconstruction, "the conversation that many have assumed was transpiring between the barmaid and gentleman is revealed to be an optical trick—the man stands outside the painter's field of vision, to the left, and looks away from the barmaid, rather than standing right in front of her." As it appears, the observer should be standing to the right and closer to the bar than the man whose reflection appears at the right edge of the picture. This is an unusual departure from the central point of view usually assumed when viewing pictures drawn according to perspective.

Asserting the presence of the mirror has been crucial for many modern interpreters. It provides a meaningful parallel with Las Meninas, a masterpiece by an artist Manet admired, Diego Velázquez. There has been a considerable development of this topic since Michel Foucault broached it in his book The Order of Things (1966).

The art historian Jeffrey Meyers describes the intentional play on perspective and the apparent violation of the operations of mirrors: “Behind her, and extending for the entire length of the four-and-a-quarter-foot painting, is the gold frame of an enormous mirror. The French philosopher Maurice Merleau-Ponty has called a mirror ‘the instrument of a universal magic that changes things into spectacles, spectacles into things, me into others, and others into me.’ We, the viewers, stand opposite the barmaid on the other side of the counter and, looking at the reflection in the mirror, see exactly what she sees... A critic has noted that Manet’s ‘preliminary study shows her placed off to the right, whereas in the finished canvas she is very much the centre of attention.’ Though Manet shifted her from the right to the center, he kept her reflection on the right. Seen in the mirror, she seems engaged with a customer; in full face, she’s self-protectively withdrawn and remote.”

The painting is rich in details which provide clues to social class and milieu. The woman at the bar is a real person, known as Suzon, who worked at the Folies-Bergère in the early 1880s. For his painting, Manet posed her in his studio. By including a dish of oranges in the foreground, Manet identifies the barmaid as a prostitute, according to art historian Larry L. Ligo, who says that Manet habitually associated oranges with prostitution in his paintings. T.J. Clark says that the barmaid is "intended to represent one of the prostitutes for which the Folies-Bergère was well-known", who is represented "as both a salesperson and a commodity—something to be purchased along with a drink."