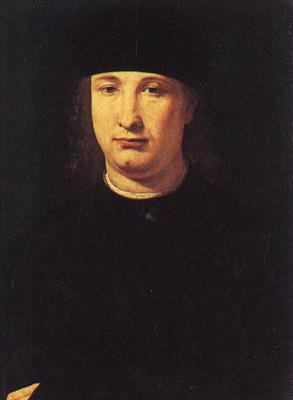 Giovanni Antonio Boltraffio (or Beltraffio) ( Milan 1466 or 1467 – 1516) was an Italian painter of the High Renaissance from Lombardy, who worked in the studio of Leonardo da Vinci. Boltraffio and Bernardino Luini are the strongest artistic personalities to emerge from Leonardo's studio. According to Giorgio Vasari, he was of an aristocratic family and was born in Milan.

His major painting of the 1490s is the Resurrection (painted with fellow da Vinci pupil Marco d'Oggiono and now in the Gemäldegalerie, Berlin). A Madonna and Child in the Museo Poldi Pezzoli of Milan, is one of the high points of the Lombard Quattrocento.

His portraits, often in profile, and his half-length renderings of the Madonna and Child are Leonardesque in conception, though the clean hard edges of his outlines lack Leonardo's sfumato.

In Bologna, where he remained in 1500-1502, he found sympathetic patrons in the Casio family, of whom he painted several portraits and for whom he produced his masterwork, the Pala Casio for the Church of the Misericordia (Louvre Museum); it depicts a Madonna and Child with John the Baptist and Saint Sebastian and two Kneeling Donors, Giacomo Marchione de' Pandolfi da Casio and his son, the Bolognese poet Girolamo Casio, who mentioned Boltraffio in some of his sonnets. Boltraffio's portrait of Girolamo Casio is at the Pinacoteca di Brera, Milan.