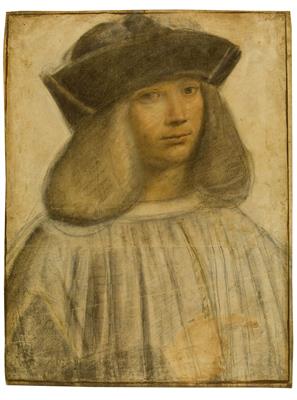 Francesco Melzi, or Francesco de Melzi (1491–1570), was an Italian painter born into a family of the Milanese nobility in Lombardy. He was one of Leonardo da Vinci’s pupils.


Francesco's father, Gerolamo Melzi, was an engineer for Francesco II Sforza's military and a captain in the militia in Milan under Louis XII. Francesco lived with his family in the Villa Melzi in Vaprio d'Adda (not to be confused with the Villa Melzi d'Eril in Bellagio, Lombardy), which today is still under the ownership of the Dukes Melzi d'Eril. Francesco grew up in the Milanese court, and was raised with proper manners and was granted a good education, which included training in the arts. He was reasonably talented in the arts and worked very hard. As a member of a prominent family of the Milanese court, however, Francesco would have had political and social responsibilities as he got older that would have caused him to discontinue his studies in art had it not been for Leonardo da Vinci. Leonardo returned to Milan for some time around 1505 and stayed with the Melzi family. It was there that he met Francesco for the first time, enticed by his good nature and handsomeness. In a biography of Leonardo da Vinci, it is argued that he felt compelled to stay in Milan longer than he had intended after meeting with the young Francesco. Francesco is described in literature as charming and graceful, an adolescent without the awkwardness or lack of manners typical of boys around this age. Francesco and another pupil of Leonardo's, Boltraffo, stood out from the other students as they were capable painters, very bright, and well-learned. Because of his upbringing in the high court, Francesco was gracious and dignified, and had a very good education. Shortly after they met, Francesco began studying and working at Leonardo's workshop and quickly became his master's favorite pupil, and the most devoted as well. Despite this, fairly little is written about the apprentice painter, and what is known about him is almost exclusively within the context of Leonardo. In fact, other than Francesco, none of Leonardo's pupils went on to become respected artists. And although he is not well-known, Francesco is referred to as being the first person responsible for collecting, organizing, and preserving Leonardo da Vinci's notes on painting, and transforming it into a manuscript copy known as the Codex Urbinas. After Leonardo's death in 1519, Francesco returned to Italy and married Angiola di Landriani, and with her he fathered eight children. One of his children, Orazio, would inherit Leonardo's manuscripts after Francesco's death in 1569/70.


Francesco Melzi's career is inextricably linked to Leonardo da Vinci, and this could be a reason that he is not well-known, because his master overshadowed him. Sigmund Freud attributed the lack of success of Leonardo's pupils, including the talented Francesco, to their inability to distinguish themselves as separate from their master, and thus their careers were unable to flourish after his death. Before Leonardo's death in 1519, Francesco's career consisted largely of being an assistant to, and an executor for, Leonardo. Because of their close relationship, more like father-son rather than master-apprentice, he was content with aiding and caring for Leonardo, a companion/secretary. One of his main tasks was to scribe his master's Codex Trivulzianus, a manuscript of learned words and ideas, which is presumed to have been written entirely in Milan because Francesco (or Leonardo) scribed "Milan" on the last page.