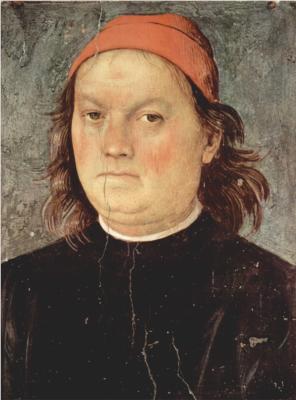 Pietro Perugino (Italian: [ˈpjɛːtro peruˈdʒiːno]; c. 1446/1452 – 1523), born Pietro Vannucci, was an Italian Renaissance painter of the Umbrian school, who developed some of the qualities that found classic expression in the High Renaissance. Raphael was his most famous pupil.

He was born Pietro Vannucci in Città della Pieve, Umbria, the son of Cristoforo Marie Vannucci. His nickname characterizes him as from Perugia, the chief city of Umbria. Scholars continue to dispute the socioeconomic status of the Vannucci family. While certain academics maintain that Vannucci worked his way out of poverty, others argue that his family was among the wealthiest in the town. His exact date of birth is not known, but based on his age at death that was mentioned by Vasari and Giovanni Santi, it is believed that he was born between 1446 and 1452.

Pietro most likely began studying painting in local workshops in Perugia such as those of Bartolomeo Caporali or Fiorenzo di Lorenzo. The date of the first Florentine sojourn is unknown; some make it as early as 1466/1470, others push the date to 1479. According to Vasari, he was apprenticed to the workshop of Andrea del Verrocchio alongside Leonardo da Vinci, Domenico Ghirlandaio, Lorenzo di Credi, Filippino Lippi and others. Piero della Francesca is thought to have taught him perspective form. In 1472, he must have completed his apprenticeship since he was enrolled as a master in the Confraternity of St Luke. Pietro, although very talented, was not extremely enthusiastic about his work.

Perugino was one of the earliest Italian practitioners of oil painting. Some of his early works were extensive frescoes for the convent of the Ingessati fathers, destroyed during the Siege of Florence; he produced for them also many cartoons, which they executed with brilliant effect in stained glass. A good specimen of his early style in tempera is the tondo (circular picture) in the Musée du Louvre of the Virgin and Child Enthroned between Saints.

Perugino returned from Florence to Perugia, where his Florentine training showed in the Adoration of the Magi for the church of Santa Maria dei Servi of Perugia (c. 1476). In about 1480, he was called to Rome by Sixtus IV to paint fresco panels for the Sistine Chapel walls. The frescoes he executed there included Moses and Zipporah (often attributed to Luca Signorelli), the Baptism of Christ, and Delivery of the Keys. Pinturicchio accompanied Perugino to Rome, and was made his partner, receiving a third of the profits. He may have done some of the Zipporah subject. The Sistine frescoes were the major high Renaissance commission in Rome. The altar wall was also painted with the Assumption, the Nativity, and Moses in the Bulrushes. These works were later destroyed to make a space for Michelangelo's Last Judgement.

Between 1486 and 1499, Perugino worked mostly in Florence, making one journey to Rome and several to Perugia, where he may have maintained a second studio. He had an established studio in Florence, and received a great number of commissions. His Pietà (1483–1493) in the Uffizi is an uncharacteristically stark work that avoids Perugino's sometimes too easy sentimental piety.