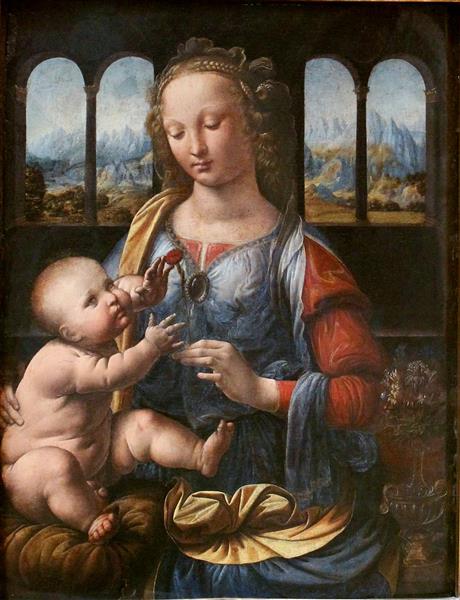 The Madonna of the Carnation

The Madonna of the Carnation, a.k.a. Madonna with Vase or Madonna with Child, is a Renaissance oil painting by Leonardo da Vinci created around 1478-1480. It is permanently displayed at the Alte Pinakothek gallery in Munich, Germany.

The central and centered motif is the young Virgin Mary seated with Baby Jesus on her lap. Depicted in precious clothes and jewellery, with her left hand Mary holds a carnation (interpreted as a healing symbol). The faces are put into light while all other objects are darker, e.g. the carnation is covered by a shadow. The child is looking up, the mother is looking down — there is no eye contact. The setting of the portrait is a room with two windows on each side of the figures.

Originally this painting was thought to have been created by Andrea del Verrocchio but subsequent art historians agree that it is Leonardo's work.

The Madonna and Child was a common motif in Christian art during the Middle Ages. This painting is the only work by Leonardo which is permanently on display in Germany.