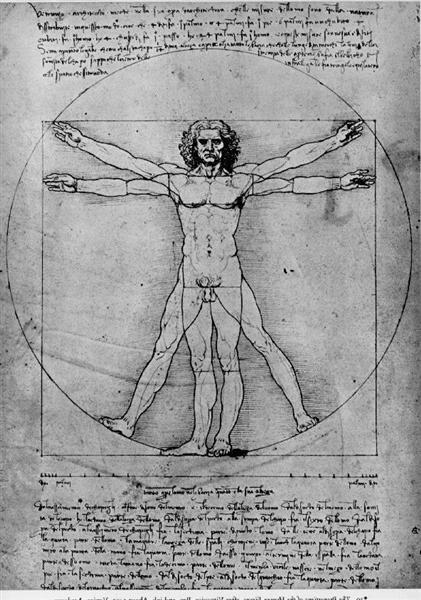 The proportions of the human figure (The Vitruvian Man)

The Vitruvian Man (Italian: Le proporzioni del corpo umano secondo Vitruvio, which is translated to "The proportions of the human body according to Vitruvius"), or simply L'Uomo Vitruviano (Italian pronunciation: [ˈlwɔːmo vitruˈvjaːno]), is a drawing by Leonardo da Vinci around 1490. It is accompanied by notes based on the work of the architect Vitruvius. The drawing, which is in pen and ink on paper, depicts a man in two superimposed positions with his arms and legs apart and inscribed in a circle and square. The drawing and text are sometimes called the Canon of Proportions or, less often, Proportions of Man. It is kept in the Gabinetto dei disegni e stampe of the Gallerie dell'Accademia, in Venice, Italy, under reference 228. Like most works on paper, it is displayed to the public only occasionally, so it isn't part of the normal exhibition of the museum.

The drawing is based on the correlations of ideal human proportions with geometry described by the ancient Roman architect Vitruvius in Book III of his treatise De architectura. Vitruvius described the human figure as being the principal source of proportion among the classical orders of architecture. Vitruvius determined that the ideal body should be eight heads high. Leonardo's drawing is traditionally named in honor of the architect.

This image demonstrates the blend of mathematics and art during the Renaissance and demonstrates Leonardo's deep understanding of proportion. In addition, this picture represents a cornerstone of Leonardo's attempts to relate man to nature. Encyclopædia Britannica online states, "Leonardo envisaged the great picture chart of the human body he had produced through his anatomical drawings and Vitruvian Man as a cosmografia del minor mondo (cosmography of the microcosm). He believed the workings of the human body to be an analogy for the workings of the universe."

According to Leonardo's preview in the accompanying text, written in mirror writing, it was made as a study of the proportions of the (male) human body as described in Vitruvius. The text is in two parts, above and below the image.

The first paragraph of the upper part reports Vitruvius: "Vetruvio, architect, puts in his work on architecture that the measurements of man are in nature distributed in this manner, that is:

and these measurements are in his buildings". The second paragraph reads: "if you open your legs enough that your head is lowered by one-fourteenth of your height and raise your hands enough that your extended fingers touch the line of the top of your head, know that the centre of the extended limbs will be the navel, and the space between the legs will be an equilateral triangle".

The lower section of text gives these proportions: