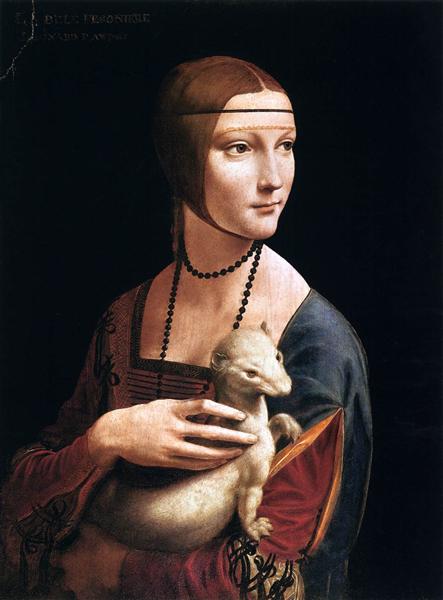 The Lady with an Ermine (Cecilia Gallerani)

The portrait Lady with an ermine (1489-1490) by Leonardo Da Vinci depicts Cecilia Gallerani, the teenage mistress of Ludovico Sforza, the regent and later the Duke of Milan. While some scholars doubted this identification, ample evidence affirms Cecilia Gallerani is the subject of Lady with an ermine. The earliest mention of the portrait appears in a sonnet by court poet Bernardo Bellincioni, in which he notes that it seems as if Cecilia is listening to an unseen speaker. Further confirmation exists in a correspondence between Cecilia and Isabella d’Este, the marquise of Mantua. In her letter, the marquise asks Cecilia to send her the portrait so she can compare Leonardo’s work to that of another master, Giovanni Bellini. Most importantly, the correspondence reveals that although Ludovico commissioned the painting, Cecilia owned it.

It is possible that because Cecilia was not of the highest rank, Leonardo allowed himself the freedom to break away from local conventions of portraiture. Most notably, he abandoned the local tradition of the profile portrait in favor of a three quarter view of the subject. Through the innovative pose Leonardo provoked the viewer’s curiosity and engaged them with the sitter of the portrait: she seems to be attentively gazing at something or someone out of view at the right side of the picture. The lady holds the ermine with her left hand, while her right hand elegantly caresses the animal’s shoulder. The suggestive hand gesture recurs in Leonardo’s later composition Leda and the Swan - even though the oil painting did not survive, the overall composition is known from drawings and oil copies made after Leonardo’s painting. In Lady with an ermine, Leonardo also demonstrated tremendous skill in his treatment of contrasting textures: the smooth skin next to the ermine’s fur, the carved jet-black beads against the chest and the intricately woven dress, the embroidered garment besides the smooth plain silk.

One of the key elements of the painting is the lively creature Cecilia holds in her arms. In fact, the symbolism of the ermine provides further evidence supporting the identification of Cecilia as the sitter. The ermine is a symbol of moderation and purity, and as such, its inclusion is appropriate for a portrait of a mistress of a Renaissance duke. Scholars also pointed to the fact that the Greek word for ermine is galé, thus it is a play on the Cecelia’s surname (Gallerani). Additionally, some have suggested that the ermine is an emblem associated to Ludovico, thus the ermine can be interpreted as an allusion to Cecilia’s lover.

Lady with an ermine was purchased in Italy around 1800 by the Polish Prince Adam Jerzy Czartoryski. He brought the painting to Poland, where he presented it to his mother, the Princess Izabella. The painting was incorporated into the family collection in Puławy, the museum founded by Princess Izabella in 1796. Today, it is the highlight of the collection at the Czartoryski Museum in Kraków, and is considered one of Poland’s national treasures.

Lady with an Ermine (Italian: Dama con l'ermellino [ˈdaːma kon lermelˈliːno]; Polish: Dama z gronostajem) is a painting by Leonardo da Vinci from around 1489–1490 and one of Poland's national treasures. The subject of the portrait is Cecilia Gallerani, painted at a time when she was the mistress of Ludovico Sforza, Duke of Milan, and Leonardo was in the service of the duke. The painting is one of only four portraits of women painted by Leonardo, the others being the Mona Lisa, the portrait of Ginevra de' Benci, and La belle ferronnière. The painting was purchased in 2016 from the Czartoryski Foundation by the Polish Ministry of Culture and National Heritage for the National Museum in Kraków and has been on display in the museum's main building since 2017.

The small portrait generally called The Lady with the Ermine was painted in oils on wooden panel. At the time of its painting, the medium of oil paint was relatively new to Italy, having been introduced in the 1470s.

The subject has been identified with reasonable certainty as Cecilia Gallerani, who was the mistress of Leonardo's employer, Ludovico Sforza.

Cecilia Gallerani was a member of a large family that was neither wealthy nor noble. Her father served for a time at the Duke's court. At the time her portrait was painted, she was about 16 years old and was renowned for her beauty, her scholarship, and her poetry. She was married at approximately age six to a young nobleman of the house of Visconti, but she sued to annul the marriage in 1487 for undisclosed reasons and the request was granted. Cecilia became the mistress of the Duke and bore him a son, even after his marriage to another woman 11 years previously, Beatrice d'Este. Beatrice was promised to the Duke when she was only 5, and married him when she was 16 in 1491. After a few months, she discovered the Duke was still seeing Cecilla, and forced the Duke to break off their relationship by marrying her off to a local count named Bergamino.

The painting shows a half-length figure, the body of a woman turned at a three-quarter angle toward her right, but her face turned toward her left. Her gaze is directed neither straight ahead, nor toward the viewer, but toward a "third party" beyond the picture's frame. In her arms, Gallerani holds a small white-coated stoat, known as an ermine. Gallerani's dress is comparatively simple, revealing that she is not a noblewoman. Her coiffure, known as a coazone, confines her hair smoothly to her head with two bands of hair bound on either side of her face and a long plait at the back. Her hair is held in place by a fine gauze veil with a woven border of gold-wound threads, a black band, and a sheath over the plait.

There are several interpretations of the significance of the ermine in her portrait. The ermine, a stoat in its winter coat, was a traditional symbol of purity because it was believed an ermine would face death rather than soil its white coat. In his old age, Leonardo compiled a bestiary in which he recorded: