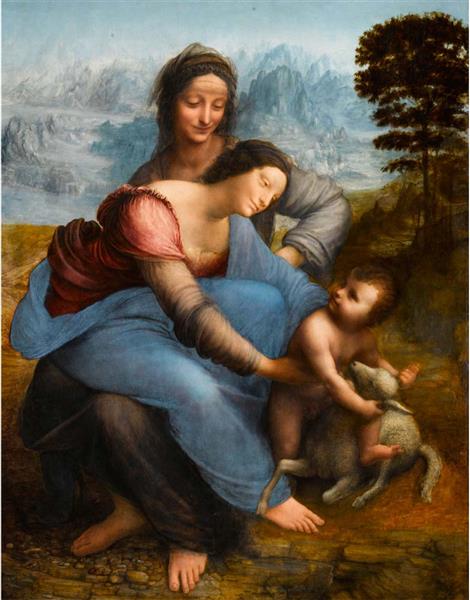 The Virgin and Child with St. Anne

Like with many of Leonardo da Vinci’s masterpieces, there are many unknown facts about his painting The Virgin and Child with St. Anne (ca. 1503-1519). It has been suggested that the painting was commissioned by the King of France, Louis XII to celebrate the birth of his only daughter Claude in 1499. The choice of subject would be adequate for such an occasion: Anne was the name of the King’s wife and St Anne is the patron saint of pregnant women and women trying to get pregnant. For unknown reasons the painting was not delivered to Louis XII, and observers noted that it was still in Leonardo’s workshop in 1517. The painting eventually ended up in the French royal collection: the first known record of The Virgin and Child with St. Anne is the 1683 inventory of the Palace of Fontainebleau. While it is not definitive, it is most likely that King Francis I acquired the painting from Leonardo’s assistant, Salai.

The scene depicts three generations, St Anne, her daughter, the Virgin Mary and Jesus as an infant. From several preparatory works, it is evident that Leonardo devoted a lot of thought to the painting’s composition. The Virgin and Child with St. Anne is closely tied to the large preparatory study, The Burlington House Cartoon (ca. 1499-1500): unlike the study that depicts the young figure of Saint John the Baptist, the painting shows young Jesus playing with a lamb. The inclusion of the lamb, a symbol associated with the Passion, hints to Christ’s destiny. Leonardo gave particular significance to the figure of St Anne by making her the axis of the triangular composition. The religious scene is set in a fantastical mountainous landscape. Leonardo used atmospheric perspective to create the illusion of the distant mountains. He also employed the sfumato technique, that softened the transition between colors, and gave the overall composition a delicate haziness.

The Virgin and Child with St. Anne holds an important place in art history, influencing Leonardo’s contemporaries as well as subsequent generations of artists. Paintings such as Raphael’s Madonna and Child with Saint John the Baptist (1507) and Andrea del Sarto’s Charity (1518) are examples of Leonardo’s profound influence on Renaissance artists. In the mid-19th century, the painting was hung in the Salon Carré at the Louvre, and was copied by many leading artists of the period like Eugène Delacroix, Édouard Manet and Jean-Baptiste Carpeaux. The founder of psychoanalysis, Sigmund Freud also analyzed the painting in his essay Leonardo da Vinci, A Memory of His Childhood. Freud’s interpretation inspired Surrealist artists such as Max Ernst. Ernst’s painting The Kiss (1927), an homage to The Virgin and Child with St. Anne, emulated the pyramidal grouping, the embracing gesture and triangular composition of Leonardo’s painting.

The Virgin and Child with Saint Anne is an oil painting by Leonardo da Vinci depicting St Anne, her daughter the Virgin Mary and the infant Jesus. Christ is shown grappling with a sacrificial lamb symbolizing his Passion as the Virgin tries to restrain him. The painting was commissioned as the high altarpiece for the Church of Santissima Annunziata in Florence and its theme had long preoccupied Leonardo.

In 1498, Leonardo probed into incorporating these figures together by drawing the Burlington House Cartoon (National Gallery). In 2008, a curator at the Louvre discovered several faint sketches believed to have been made by Leonardo on the back of the painting. Infrared reflectography was used to reveal a "7-by-4 inch drawing of a horse's head", which had a resemblance to sketches of horses that da Vinci had made previously before drawing The Battle of Anghiari. Also revealed was a second sketch 6​1⁄2 inch-by-4 inch depiction of half a skull. A third sketch showed the infant Jesus playing with a lamb, which sketch was similar to that which is painted on the front side. The Louvre spokesperson said that the sketches were "very probably" made by Leonardo and that it was the first time that any drawing had been found on the "flip side of one of his works". The drawings will be further studied by a group of experts as the painting undergoes restoration.

Leonardo's painting is at once both pleasing, calm yet confusing upon closer examination. The composition of the three figures is fairly tight, with the Virgin Mary clearly interacting actively with the infant Jesus. Upon closer examination of their positioning it is apparent that Mary is sitting on St Anne's lap. It is unclear what meaning this could have and what meaning Leonardo intended to project with that pose. There is no clear parallel in other works of art and women sitting in each other's lap are not a clear cultural or traditional reference that the viewer can relate to. Additionally, although the exact sizes of neither the Mother Virgin nor St Anne are known, it can be extrapolated from the painting that St Anne is a significantly larger person than Mary. This subtle yet perceptible distortion in size was utilized by Leonardo to emphasize the mother daughter relationship between the two women despite the apparent lack of visual cues to the greater age of St Anne that would otherwise identify her as the mother. The child is holding a lamb. we also see that Mary is staring into her child's eyes but st Anne is staring at Mary. As Mary is sitting on her lap and St Anne is staring at the virgin Mary Leonardo was maybe trying to point a message across about their relationship and personalities.

Sigmund Freud undertook a psychoanalytic examination of Leonardo in his essay Leonardo da Vinci, A Memory of His Childhood. According to Freud, the Virgin's garment reveals a vulture when viewed sideways. Freud claimed that this was a manifestation of a "passive homosexual" childhood fantasy that Leonardo wrote about in the Codex Atlanticus, in which he recounts being attacked as an infant in his crib by the tail of a vulture. Freud translated the passage thus:"It seems that I was always destined to be so deeply concerned with vultures—for I recall as one of my very earliest memories that while I was in my cradle a vulture came down to me, and opened my mouth with its tail, and struck me many times with its tail against my lips."