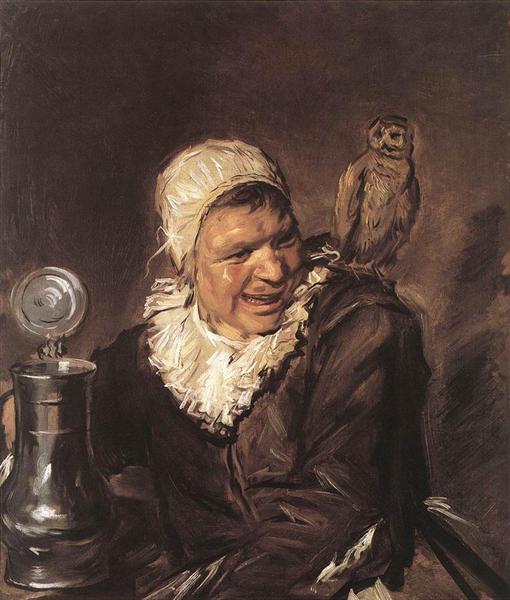 A tronie (16/17th-century Dutch for "face") is a common type, or group of types, of works common in Dutch Golden Age painting and Flemish Baroque painting that shows an exaggerated facial expression or a stock character in costume.

The term 'tronie' is not clearly defined in art historical literature. Literary and archival sources show that initially the term 'tronie' was not always associated with people. Inventories sometimes referred to flower and fruit still lifes as 'tronies'. More common was the meaning of face or visage. Often the term referred to the entire head, even a bust, and in exceptional cases the whole body. A tronie could be two-dimensional, but also made of plaster or stone. Sometimes a tronie was a likeness, the depiction of an individual, including the face of God, Christ, Mary, a saint or an angel. In particular a tronie denoted the characteristic appearance of the head of a type, for example a farmer, a beggar or a jester. Tronie sometimes meant so much as a grotesque head or a model such as the type of an ugly old person. When conceived as the face of an individual and of a type a tronie's aim was to express feelings and character in an accurate manner and must therefore be expressive.

In modern art-historical usage the term tronie is typically restricted to figures not intended to depict an identifiable person, so it is a form of genre painting in a portrait format. Typically a painted head or bust only, if concentrating on the facial expression, but often half-length when featured in an exotic costume, tronies might be based on studies from life or use the features of actual sitters. The picture was typically sold on the art market without identification of the sitter, and was not commissioned and retained by the sitter as portraits normally were. Similar unidentified figures treated as history paintings would normally be given a title from the classical world, for example the Rembrandt painting now known as Saskia as Flora.

The genre started in the Low Countries in the 16th century where it was likely inspired by some of the grotesque heads drawn by Leonardo. Leonardo had pioneered drawings of paired grotesque heads whereby two heads, usually in profile, were placed opposite each other in order to accentuate their diversity. This paired juxtaposition was also adopted by artists in the Low Countries. In 1564 or 1565 Joannes and Lucas van Doetecum are believed to have engraved 72 heads attributed to Pieter Brueghel the Elder that followed this paired arrangement.

This paired model was still being used by some artists in the 17th century. For instance, the Flemish artist Jan van de Venne who was active in the first half of the 17th century painted a number of tronies juxtaposing different faces.

Several Rembrandt self-portrait etchings are tronies, as are paintings of himself, his son and his wives. Three Vermeer paintings were described as "tronies" in the Dissius auction of 1696, perhaps including the Girl with a Pearl Earring and the Washington Young Girl with a flute. Frans Hals also painted a number of tronies, which are now among his best-known works, including the two tronies known as Malle Babbe and the Gypsy Girl (see gallery).