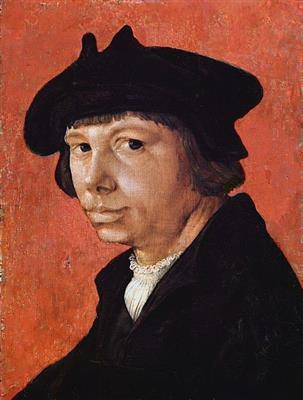 Lucas van Leyden (1494 – 8 August 1533), also named either Lucas Hugensz or Lucas Jacobsz, was a Dutch painter and printmaker in engraving and woodcut. Lucas van Leyden was among the first Dutch exponents of genre painting and was a very accomplished engraver.


Lucas was the son of the painter Huygh Jacobsz. He was born, died, and was mainly active in Leiden.


Carel van Mander characterizes Lucas as a tireless artist, who as a child annoyed his mother by working long hours after nightfall, which she forbid not only for the cost of candlelight, but also because she felt that too much study was bad for his sensibilities. According to Van Mander, as a boy he only consorted with other young artists, such as painters, glass-etchers and goldsmiths, and was paid by the Heer van Lochorst (Johan van Lockhorst of Leiden, who died in 1510) a golden florin for each of his years at age 12 for a watercolor of St. Hubert.


He learned basic techniques from his father and from Cornelis Engelbrechtsz, but his precocious originality was paramount. Where he learnt engraving is unknown, but he took advantage of the works of Marcantonio Raimondi, whose motifs are reworked in Lucas' engravings and paintings, and became highly skilled in that art at a very early age: the earliest known print by him (Mohammed and the Murdered Monk) dates from 1508, when he was perhaps only 14, yet reveals no trace of immaturity in inspiration or technique.


Seventeen paintings surely by Lucas survive, and a further twenty-seven are known from descriptions by Carel van Mander, from contemporary copies or from drawings of them made by Jan de Bisschop in the later 17th century. Max Friedländer descried no clear pattern of stylistic development, in large part because Lucas' oeuvre was swelled and obscured by attributions since found unsustainable.


Four broad stages in his artistic development are characterized by Elise Lawton Smith as his early half-length figures (c 1506-1512), the development of his landscapes (c 1512-1520), the influence of Antwerp paintings (c 1521-25) and the late works (ca 1525-1531), where multiple figures are deployed against wooded landscapes, as in the Healing of blind man of Jericho (illustration).


Raimondi's studies of nudes inspired van Leyden in his later work, particularly his altarpieces, in which he is an early Dutch adopter of the Italian-style nude figure. Two further artistic influences were Albrecht Dürer and Jan Gossaert. Indeed, he was friends with both, and Dürer drew van Leyden's portrait when they met in 1521. Dürer's mastery of engraving and Gossaert's Romanist style both heavily influenced van Leyden's work.


Lucas's print included secular subjects, and many depictions of famous Biblical scenes, including Adoration of the Magi, The Virgin and Child on the Crescent, and The Holy Family.


From 1513 to 1517, Lucas created a series of woodcuts called “The Power of Women,” which consisted of two large and small sets of prints. The series is one of a number of representations of the Power of Women theme, which was extremely popular in Renaissance art and literature. Artworks in the genre depict the traditional roles of men and women in inverse, with women dominating over men in various situations. The subjects illustrated often consist of legendary historical women who were considered to be virtuous heroines as well as women who were considered cunning, seductive, and manipulative of men. The purpose of the "Power of Women" theme was to demonstrate that even the strongest and wisest of men were not resistant to the sexuality of women.