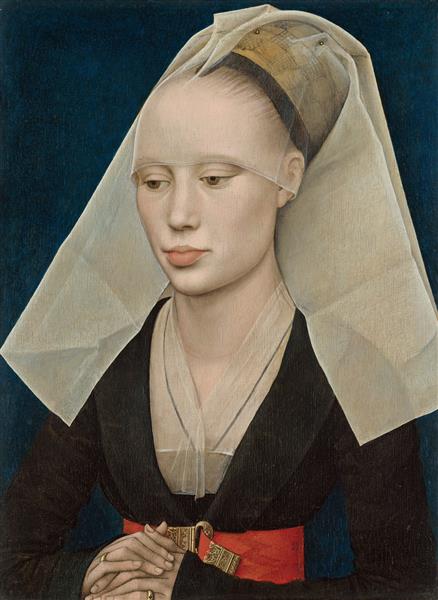 Portrait of a Lady

Portrait of a Lady (or Portrait of a Woman) is a small oil-on-oak panel painting executed around 1460 by the Netherlandish painter Rogier van der Weyden. The composition is built from the geometric shapes that form the lines of the woman's veil, neckline, face, and arms, and by the fall of the light that illuminates her face and headdress. The vivid contrasts of darkness and light enhance the almost unnatural beauty and Gothic elegance of the model.

Van der Weyden was preoccupied by commissioned portraiture towards the end of his life and was highly regarded by later generations of painters for his penetrating evocations of character. In this work, the woman's humility and reserved demeanour are conveyed through her fragile physique, lowered eyes and tightly grasped fingers. She is slender and depicted according to the Gothic ideal of elongated features, indicated by her narrow shoulders, tightly pinned hair, high forehead and the elaborate frame set by the headdress. It is the only known portrait of a woman accepted as an autograph work by van der Weyden, yet the sitter's name is not recorded and he did not title the work.

Although van der Weyden did not adhere to the conventions of idealisation, he generally sought to flatter his sitters. He depicted his models in highly fashionable clothing, often with rounded—almost sculpted—facial features, some of which deviated from natural representation. He adapted his own aesthetic, and his portraits of women often bear a striking resemblance to each other.

The painting has been in the National Gallery of Art in Washington, D.C. since donated in 1937, and is no. 34 in the de Vos catalogue raisonné of the artist. It has been described as "famous among all portraits of women of all schools".

The woman, who is probably in her late teens or early twenties, is shown half-length and in three-quarters profile, set against a two-dimensional interior background of deep blue-green. The background is flat and lacks the attention to detail common in van der Weyden's devotional works. Like his contemporary Jan van Eyck (c. 1395 – 1441), when working in portraiture, he used dark planes to focus attention on the sitter. It was not until Hans Memling (c. 1435–1494), a pupil of van der Weyden, that a Netherlandish artist set a portrait against an exterior or landscape. In this work the flat setting allows the viewer to settle on the woman's face and quiet self-possession. Van der Weyden reduces his focus to four basic features: the woman's headdress, dress, face and hands. The background has darkened with age; it is likely that the angles created by the sitter's hennin and dress were once much sharper.

The woman wears an elegant low-cut black dress with dark bands of fur at the neck and wrist. Her clothes are of the then-fashionable Burgundian style, which emphasises the tall and thin aesthetic of the Gothic ideal. Her dress is buckled by a bright red sash pulled in below her breasts. The buff-coloured hennin headdress is draped with a large transparent veil, which spills over her shoulders, reaching her upper arms. Van der Weyden's attention to the structure of the clothing—the careful detailing of the pins pushed into the veil to fix its position—is typical for the artist.