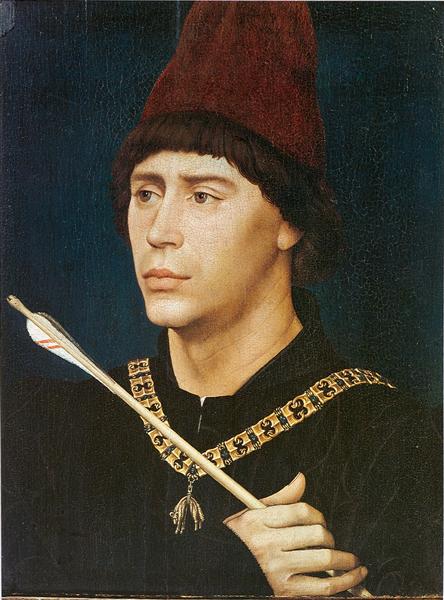 Portrait of Antoine, bastard of Burgundy

Portrait of Antoine, 'Grand Bâtard' of Burgundy (or Portrait of Anthony of Burgundy) is an oil panel painting by the Netherlandish painter Rogier van der Weyden portraying Anthony of Burgundy, the bastard son of Philip the Good and one of his mistresses, Jeanne de Presle. The panel is dated to about 1460 and held in the Musées royaux des Beaux-Arts, Belgium. He wears the livery collar of Order of the Golden Fleece, a chivalric order established January 10, 1430, by Philip the Good, Duke of Burgundy. In 1456 Anthony was inducted into the prestigious Order, held by only 29 others at that time. The exact significance of the arrow held in the bastard's hand is unknown, although the fleece is thought to refer to either the Greek mythological hero Jason or the Hebrew warrior and judge Gideon.

The work is one of three high-profile van der Weyden portraits commissioned by the Dukes of Burgundy around 1460. The other two are his portraits of Philip the Good and Charles the Bold. In common with most of van der Weyden's male portraits, Antoine is shown half profile, staring aloofly into the middle distance.

In his later commissioned portraits, van der Weyden typically flattered his sitters. He often idealised or softened their facial features, allowing them a handsomeness or beauty, or interest or intelligence they might not have been blessed with in life. If this portrait is compared to the unromantic portrait of Antoine attributed to Hans Memling, painted 8–10 years later, one can see the liberties taken by van der Weyden. Even allowing for aging, the artist seems to have enlarged the eyes, defined the contours of the face, and given a much stronger jaw than seen in Memling's portrait.