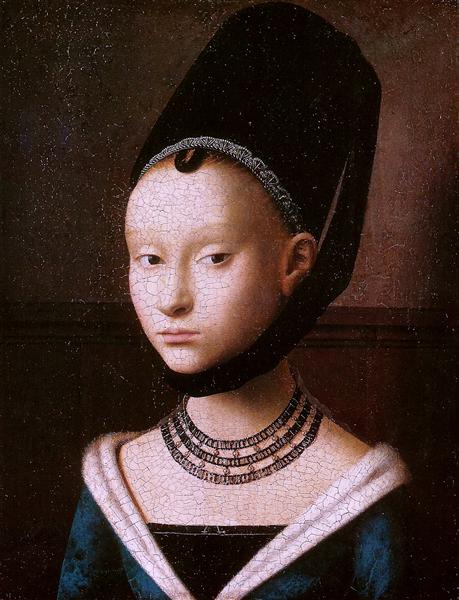 Portrait of a Young Girl

Portrait of a Young Girl is a small oil-on-oak panel painting by the Early Netherlandish painter Petrus Christus. It was completed towards the end of his life, between 1465 and 1470, and is held in the Gemäldegalerie, Berlin. It marks a major stylistic advance in contemporary portraiture; the girl is set in an airy, three-dimensional, realistic setting, and stares out at the viewer with a complicated expression that is reserved, yet intelligent and alert.

It is widely regarded as one of the most exquisite portraits of the Northern Renaissance. Art historian Joel Upton described the sitter as resembling "a polished pearl, almost opalescent, lying on a cushion of black velvet." The panel builds on the work of Jan van Eyck and Rogier van der Weyden, and was highly influential in the decades after its completion. Its appeal lies in part in her intriguing stare, accentuated by the slight misalignment of her eyes, while the eyebrows are faintly skewed.

Christus frames his sitter in a rigid and balanced architectural setting. She is positioned within a narrow rectangular space, before a wainscotted wall. The image is divided by the horizontal parallel lines of her wainscot and blouse, which join at the inverted triangle formed by the neckline of her dress. The rendering of the background departs somewhat from contemporary conventions in portraiture: Christus sets the girl against a dark brown wall with little detail, in contrast to the elaborate interiors of Jan van Eyck, who is often regarded as Christus' master. It is defined entirely by its material, a wooden dado rail along the top and the wainscot that forms the lower portion. The wall sets her in a realistic interior, perhaps intended to represent a space within her home.

Light falls on the pictorial space from the left, creating shadows against the back wall, the strongest cast by the girl's hennin. The depth of space provided by the back wall gives room for this detailing, which Charles Sterling believes is indebted to van Eyck. The light throws a murky but curved shadow on the wall behind the girl and acts as a counterpoint to the contour of her cheek and hairline.

The girl has pale skin, almond and slightly oriental eyes and a petulant mouth. She reflects the Gothic ideal of elongated facial features, narrow shoulders, tightly pinned hair and an almost unnaturally long forehead, achieved through tightly pulled-back hair which has been plucked at the top. She is dressed in expensive clothing and jewellery and seems to be uncommonly elegant. She looks out of the canvas in an oblique but self-aware and penetrating manner that some art historians have described as unnerving. Joanna Woods-Marsden remarks that a sitter acknowledging her audience in this way was virtually unprecedented even in Italian portrait painting. Her acknowledgment is accentuated by the painting's crop, which focuses the viewer's gaze in a near-invasive manner that seems to question the relationship between artist, model, patron and viewer.

The headdress is a variant of the truncated or bee-hive hennin, then fashionable at the Burgundian court. A very similar style, with no tail, is seen on the older of two girls in the donor panels of Presentation of Christ by the Master of the Prado Adoration of the Magi, a pupil of Rogier van der Weyden. The black band under the chin is rarely found in other images from the period, and has been interpreted as a style borrowed from the male chaperon hat, which always has a long tailing tail or cornette, sometimes worn wrapped under the chin in this way.