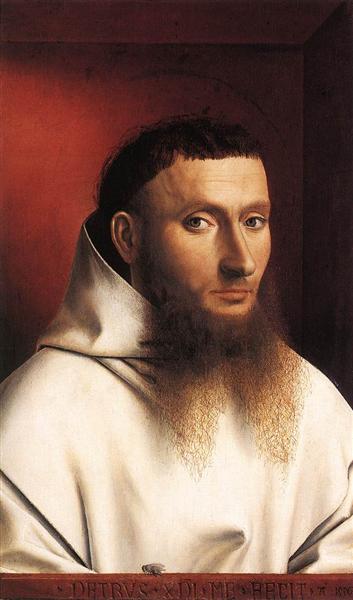 Potrait of a Carthusian

Portrait of a Carthusian is a painting in oils on oak panel by the Early Netherlandish painter Petrus Christus in 1446. The work is part of the Jules Bache Collection housed at the Metropolitan Museum of Art in New York City.

It is regarded as a masterpiece of Early Netherlandish painting and a prominent, early example of Trompe l’oeil.

Portrait of a Carthusian depicts a three-quarter portrait of anonymous Carthusian monk captured in mid-turn, gazing directly at the viewer. Because the monk’s body is turned to his left, he must look over his right shoulder to gaze at the viewer, creating a somewhat cumbersome diagonal pose. Petrus Christus balances this out by shifting the axis of the monk’s face to the right, placing him just off center. By further modeling the monk’s right shoulder more than his left shoulder, Christus draws one side of the body closer to the viewer, adding more depth to the work. The proportions of the monk’s face have also been exaggerated; the nose and eyes having been purposefully elongated. The overall effect is something of an exaggerated silhouette, a compositional technique not often found in Early Netherlandish Painting.

The lighting scheme employed by Petrus Christus is also noteworthy. The Monk is bathed in intense light, setting his figure dramatically against the space that he occupies. While this strong, raking light is typical of contemporaries like Jan van Eyck, Christus’ addition of a second, opposing lighting source behind the monk marks this portrait as distinctive. The light on the left seems to be a reflection from within the room, yet the light bathing the monk seems to be coming from an external source, perhaps an unseen window. The result is that light comes from both in and outside the pictorial space, with the monk (particularly along the hood of his cloak) being the meeting point of the two. The monk is therefore framed by a two-source lighting structure, allowing Christus to employ a much fuller and richer spectrum of colors and shading than a single-source lighting structure would. This complex lighting scheme is the reason Portrait of a Carthusian appears fully 3-dimensional and realistic.

Portrait of a Carthusian sports a Trompe-l'œil fly on the center of its lower frame. The addition of Trompe l’oeil flies to works of art is believed to have begun in the 15th century, right as Christus became active. Art Historians are generally split between two different interpretations of their use. Many art historians believe the fly to hold religious symbolism, functions as connotations of sin, corruption, mortality, etc. Art historians believe that a fly was used to evoke such images in connection with Satan’s moniker Beelzebub—the Lord of the Flies. More recently, art historians are beginning to view the inclusion of Trompe l’oeil flies as a professional calling card, with art historian Felix Thülemann describing it as “a selfconscious representation of superior painterly prowess. It is believed that this is why the fly generally appears next to the artist’s signature (the fly’s position right next to ‘Petrus ΧΡΙ Me Fecit’ hinting that the fly might be the referent of ‘me’ rather than the painting.)