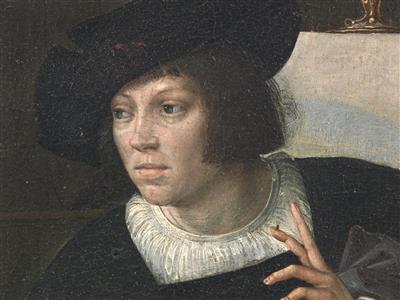 Bernard van Orley (between 1487 and 1491 – 6 January 1541), also called Barend or Barent van Orley, Bernaert van Orley or Barend van Brussel, was a versatile Flemish artist and representative of Dutch and Flemish Renaissance painting, who was equally active as a designer of tapestries and, at the end of his life, stained glass. Although he never visited Italy, he belongs to the group of Italianizing Flemish painters called the Romanists, who were influenced by Italian Renaissance painting, in his case especially by Raphael.


He was born and died in Brussels and "served as a sort of commissioner of the arts for the Brussels town council". He was the court artist of the Habsburg rulers. He was extremely productive, concentrating on the design of his works, and leaving their execution largely to others, in the case of painting, and entirely so, in the case of the tapestries and stained glass. This he may have learned from Raphael, whose workshop in Rome was unprecedentedly large.


Due to his reliance on workshop execution, his many surviving works vary considerably in quality. Many drawings, mostly studies for designs for tapestries and stained glass, also survive. He or his workshop would have produced full-scale cartoons for the tapestries, but these were normally lost in the course of weaving, when they were cut into strips. The prevalent subject matter of his paintings are religious scenes and portraits, and he painted only a limited number of mythological and allegorical subjects. His portraits mostly depict members of the Habsburg dynasty and were produced in multiple versions by his workshop. The subject matter of his tapestries was more varied, reflecting the normal range of that medium, from biblical cycles to allegories, battle and hunting scenes.


His father had been a tapestry designer in Brussels, and several of Bernard's descendants were artists. A number of them were still active in the 18th century.


His family came originally from Luxembourg, descendants from the Seigneurs d'Ourle or d'Orley. His branch of the family then moved to the Duchy of Brabant, where his father Valentin van Orley (ca. 1466 - Brussels 1532) was born as an illegitimate child and lost his noble lineage. Bernard and his brother Everard (who would also become a painter) were both born in Brussels.


The painted wing panels of the sculpted Saluzzo retable are attributed to Valentin van Orley, describing the Life of St. Joseph (ca. 1510). The retable itself is Gothic in style, but these wing panels already show some characteristic of the Renaissance style (City Museum of Brussels). The panels of the Life of St. Roch in the Saint James' Church, Antwerp have been ascribed to Everard van Orley.


In 1512 Bernard van Orley married Agnes Seghers; in 1539, shortly after Agnes' death, he married Catherina Hellinckx. He had nine children. His four boys followed in the footsteps of their father and also became painters.


It is sometimes presumed that Bernard van Orley completed his art education in Rome in the school of Raphael, however there are no reliable sources to prove this. At that time, there were only a few painters with some renown in Brussels, such as Van Laethem and painters from the Coninxloo family. It is therefore much more likely that he was initially taught in the workshop of his father, an obscure painter whose name appears as "master" in the "Liggere" (registers) of the Guild of St. Luke of Antwerp and who had several pupils.