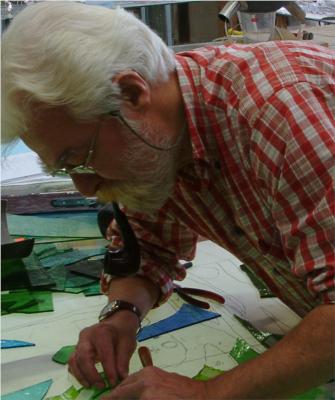 Daan Lemaire - abstract painter
Daan Lemaire was born in 1942 in Naarden, a small Dutch village close to Amsterrdam. As a boy he lived in Amsterdam and later in Middelburg in the province Zeeland. He followed the Art Academy in Breda only for a few years.
He turned back to Amsterdam where he would live and work till now.

Lemaire followed painting lessons in Amsterdam from the surrealist painter Gerrit van het Net. That was a big part of the reason why he painted till circa 1980 in a figurative surrealist style.
For his living he accepted a job in the glass studio Tetterode in Amsterdam. Later he started to use these experiences and would create glass-sculptures by himself, first in the technique of glass-applique.
After 2004 Lemaire started to work in the glass-fusion technique which enabled him to create glass sculptures more painterly, because of the fusion of the used colors.

His painting style changed dramatically circa 1980. The art of Mark Rothko became then temporalely very important as an inspiration.
He mainly painted abstract in oil-paintings on canvas.

From 2005 the watercolor technique on paper is his favorite medium.