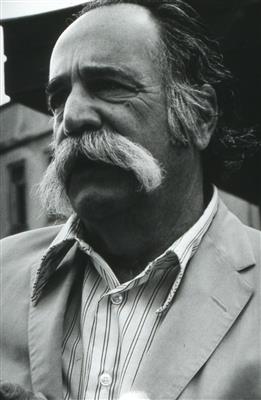 William Saroyan (/səˈrɔɪən/; August 31, 1908 – May 18, 1981) was an Armenian-American novelist, playwright, and short story writer. He was awarded the Pulitzer Prize for Drama in 1940, and in 1943 won the Academy Award for Best Story for the film adaptation of his novel The Human Comedy.


Saroyan wrote extensively about the Armenian immigrant life in California. Many of his stories and plays are set in his native Fresno. Some of his best-known works are The Time of Your Life, My Name Is Aram and My Heart's in the Highlands.


He has been described in a Dickinson College news release as "one of the most prominent literary figures of the mid-20th century" and by Stephen Fry as "one of the most underrated writers of the [20th] century." Fry suggests that "he takes his place naturally alongside Hemingway, Steinbeck and Faulkner."


William Saroyan was born on August 31, 1908 in Fresno, California, to Armenak and Takuhi Saroyan, Armenian immigrants from Bitlis, Ottoman Empire. His father came to New York in 1905 and started preaching in Armenian Apostolic churches.


At the age of three, after his father's death, Saroyan, along with his brother and sister, was placed in an orphanage in Oakland, California. He later went on to describe his experience in the orphanage in his writings. Five years later, the family reunited in Fresno, where his mother, Takuhi, had already secured work at a cannery. He continued his education on his own, supporting himself with jobs, such as working as an office manager for the San Francisco Telegraph Company.


Saroyan decided to become a writer after his mother showed him some of his father's writings. A few of his early short articles were published in Overland Monthly. His first stories appeared in the 1930s. Among these was "The Broken Wheel", written under the name Sirak Goryan and published in the Armenian journal Hairenik in 1933. Many of Saroyan's stories were based on his childhood experiences among the Armenian-American fruit growers of the San Joaquin Valley or dealt with the rootlessness of the immigrant. The short story collection My Name is Aram (1940), an international bestseller, was about a young boy and the colorful characters of his immigrant family. It has been translated into many languages.


As a writer, Saroyan made his breakthrough in Story magazine with "The Daring Young Man on the Flying Trapeze" (1934), the title taken from the nineteenth-century song of the same title. The protagonist is a young, starving writer who tries to survive in a Depression-ridden society.


This character resembles the penniless writer in Knut Hamsun's 1890 novel Hunger, but lacks the anger and nihilism of Hamsun's narrator. The story was republished in a collection whose royalties enabled Saroyan to travel to Europe and Armenia, where he learned to love the taste of Russian cigarettes, once observing, "you may tend to get cancer from the thing that makes you want to smoke so much, not from the smoking itself." (from Not Dying, 1963)


Saroyan served in the US Army during World War II. He was stationed in Astoria, Queens, spending much of his time at the Lombardy Hotel in Manhattan, far from Army personnel. In 1942, he was posted to London as part of a film unit. He narrowly avoided a court martial when his novel, The Adventures of Wesley Jackson, was seen as advocating pacifism.