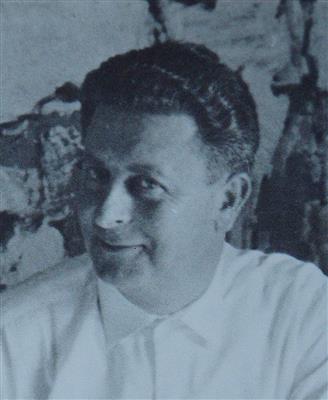 A central figure of the post-war ‘Jeune Peinture Belge’ artist group, develops from 1948 onwards a lyrical abstraction exploring the wonders of nature. His work today is a source of inspiration for contemporary European landscape painting.

Louis Van Lint studied painting at the Academy of Saint-Josse-ten-Noode (Brussels) under Henry Ottevaere and Jacques Maes until 1939. He studied sculpture and architecture as well. His early work reflects a traditional figurative painting style with a unique sense of color. In 1940 he founded the group "La Route Libre" with Gaston Bertrand and Anne Bonnet. His art was influenced to some degree by the animist movement, but he eventually broke away with the presentation of his painting, The Flayed Body (L'Ecorche, 1943), a shocking expression of his wish for more artistic freedom that consequently sounded a revolt against animism. As his style matured, he switched to abstraction in which he excelled as colorist and master of form. After World War II he co-founded The Young Belgian Painters (La Jeune Peinture Belge) with Gaston Bertrand, Anne Bonnet and some others. Van Lint experimented with geometric abstraction for a decade, and then, influenced by the French painter Bazaine, he started his lyrical abstraction period. He participated in the demonstrations and exhibitions of the CoBrA group. In 1958, The Solomon R. Guggenheim Foundation gave him a prize and in 1960 he became a member of the Royal Academy of Belgium. In the 1960s, he introduced Hergé to abstract painting and provided him with private lessons for one year.

He has long been represented in Belgian section in outstanding exhibitions of contemporary painting and his work is held by several museums all over the world such as the Royal Museums of Fine Arts of Belgium, the Uffizi Gallery of Florence, the Guggenheim and the Brooklyn museums in New York, the Carnegie Museum of Art in Pittsburgh, and the São Paulo Contemporary Art Museum in Brazil.

All along his life, Van Lint collected antique tools chosen for their harmonious shapes. Part of the collection decorated a wall of his living room and aroused the curiosity and interest of many famous guests.