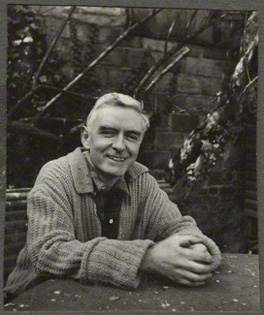 Jean René Bazaine (21 December 1904 in Paris – 4 March 2001 in Clamart) was a French painter, designer of stained glass windows, and writer. He was the great great grandson of the English Court portraitist Sir George Hayter.

Bazaine studied sculpture at the Académie Julian and with Paul Landowski after a brief passage at the École des Beaux-Arts. At the same time he continued his study of philosophy and literature at the Sorbonne in Paris attaining certificats in art history and philosophy (1921–1925). Bergson's L'évolution créatrice was his main inspiration at the time. With Baltrušaitis he participated at the first "Groupe d'Histoire de l'art" led by Emile Mâle and Henri Focillon.

These studies would culminate in an influential text Notes sur la peinture d'aujourd'hui (1948), aimed at going beyond the boundaries -quite dogmatic at the time- of abstract and figurative. It supplied the theoretical base for his creative criticism that found its practical use when he was invited, in 1952, by the Carnegie Foundation to sit as the European member of the jury for the Pittsburgh International Exhibition of Contemporary Painting in company with the American painter William Baziotes.

Bazaine did not pursue his initiation into sculpture, though he became one of the great friends of Alexander Calder, Henri Laurens and of Giacometti, his neighbour at his atelier in the Paris Zone -Porte de Vanves.

Bazaine was to develop into a significant Modern School of Paris painter. A fire in his workshop in 1945 destroyed almost his entire production, leaving only scant reference to his important series of watercolors of the 1930s that prefigured the experimental feel of his mature work.

His work was first shown in company with Jean Fautrier, Édouard Goerg (fr) and Marcel Gromaire (Galerie Jeanne Castel, Paris 1930). At his first individual show (Galerie Van Leer, Paris 1932) he was favourably received by Pierre Bonnard who seemed to recognize a progressive tendency rooted in his own sense of colour (Post-Impressionism developing into Abstract Impressionism). In 1937 he first bonded in friendship with Jacques Villon.

Demobilized from the army in 1941 Bazaine, in the face of the prejudice over Degenerate Art, organized an avant-garde picture show (Galerie Braun Paris 1941) under the heading Vingt Jeunes Peintres de Tradition Française: Estève, Lapique, Pignon were but a few of the artists involved. 1942 was to be the year of his definitive turn towards the abstract - though he would never refer to himself as an abstract painter (Bernier 1955). In 1949/1950 he had his first major one man show at the Galerie Maeght, who remained his art dealer thenceforth. From then on it was a steady progress of major exhibitions: Bern, Hanover, Zürich, Oslo... 1987 a retrospective exhibition in Galerie Maeght, 1988 a retrospective of his drawings in the Musée Matisse and finally in 1990 the Exposition Bazaine in the Galeries Nationales du Grand Palais, Paris., which was accompanied by the reissue of his major texts on painting in art theory as Le temps de la peinture (Paris, Aubier 1990).