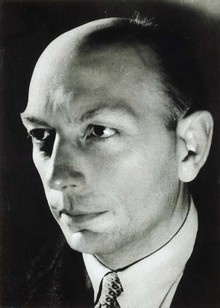 Henri Michaux (French: [miʃo]; 24 May 1899 – 19 October 1984) was a highly idiosyncratic Belgian-born poet, writer, and painter who wrote in French. He later took French citizenship. Michaux is best known for his esoteric books written in a highly accessible style. His body of work includes poetry, travelogues, and art criticism. Michaux travelled widely, tried his hand at several careers, and experimented with psychedelic drugs, especially LSD and mescaline, which resulted in two of his most intriguing works, Miserable Miracle and The Major Ordeals of the Mind and the Countless Minor Ones.

In 1930–1931, Henri Michaux visited Japan, China and India. The result of this trip is the book A Barbarian in Asia. Oriental culture became one of his biggest influences. The philosophy of Buddhism, and Oriental calligraphy, later became principal subjects of many of his poems and inspired many of his drawings.

He also traveled to Africa and to the American continent, where he visited Ecuador and published the book Ecuador. His travels across the Americas finished in Brazil in 1939, and he stayed there for two years.

Michaux is best known for his stories about Plume – "a peaceful man" – perhaps the most unenterprising hero in the history of literature, and his many misfortunes. All his writing is strange and original. As his translator put it in Darkness Moves, the most comprehensive Michaux anthology in English, his poems are "messages from his inner space." That space may be transformed by drugs as in Miserable Miracle or by terrifying vision, as in "Space of the Shadows" (in Darkness Moves) but the "messages" from it are always as clear and concrete as possible.

Henri Michaux was also a highly original artist. His work is not quite figurative, but suggestive. The Museum of Modern Art in Paris and the Guggenheim Museum in New York both had major shows of his work in 1978.

In 1955 he became a citizen of France, and he lived the rest of his life there along with his family. In 1965 he won the National Prize of Literature, which he refused to accept.