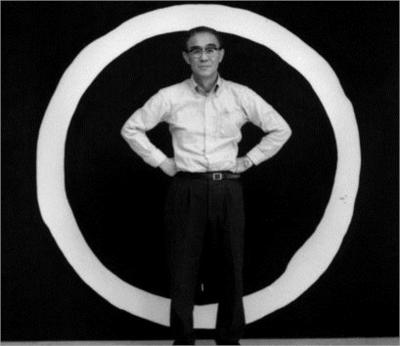 Jiro Yoshihara (吉原 治良, Yoshihara Jirō, January 1, 1905 – February 19, 1972) was a Japanese painter. In 1954, along with Shōzō Shimamoto, he co-founded the avant-garde Gutai group in Osaka. He was a businessman and scion of a family that owned a cooking-oil company, along with a group of young, Hanshin-region artists. Yoshihara had taught Western-style painting before becoming Gutai’s leader. Yoshihara wrote the "Gutai Manifesto" in 1956 and was the leader of the so named group of internationally acclaimed avant-garde artists representative of Japan's post-war art world. He worked in surrealist and abstract expressionist painting styles before turning, in his final years, to the repeated depiction of circles reminiscent of "satori," the enlightenment of Zen. This white circle was made by leaving the canvas unpainted while painting the background black. When asked about his circles, Yoshihara said that he could not manage to paint even one circle with satisfaction, an indication of the depths of his pursuit of this form. Indeed, no two of his circles are shaped exactly alike. He was the leader of the Gutai Group until his death in 1972.

Jiro Yoshihara was born in Osaka, Japan in 1905 as the second son of a wealthy merchant family. He did not receive any formal art education during his childhood. In his twenties, he received guidance from Kamiyama Jiro (1985–1940), who taught European art and philosophy, and Tsuguharu Foujita (1886–1968), who lived in Paris in those years. Yoshihara later joined the Nika-kai (Second Section Association), a group of predominately fauvist style painters, that came out from the Ministry of Education’s academic salon.
During the 1920s and 1930s, Yoshihara was attracted to the work of Giorgio de Chirico, Joan Miró, and Wassily Kandinsky.
In 1934, Yoshihara’s first exhibition was taken place at the Nika-kai’s annual show. During the 1930s, Yoshihara works were created in a surrealist manner that was popular among Japanese avant-garde artists. Gradually, Yoshihara gains his interest in geometric abstraction.
In 1938, he founded the Kyushitsu-kai (Ninth Room Association), which is a counter against the Fauvist dominated Nikai-kai. Approximately during the years of 1935 to 1945, it was the darkest and the most least active period for Yoshihara.

In the early 1950s, works by Yoshihara were featured in the opening shows of Nihon Kokusai Bijutsu-ten (International Art Exhibition Japan) and Gendai Nihon Bijutsu-ten (Contemporary Art Exhibition of Japan) during the resurgence of contemporary art in Japan. In Osaka 1951, Yoshihara and others established the Gendai Bijutsu Kondan Kai (Contemporary Art Discussion Group), known as "Genbi". This group served as a workshop and forum for creating new art forms merging Eastern and Western culture as well as the modern and traditional. The main focus of Yoshihara was gaining recognition in the art world through Japanese tradition. In 1952 Yoshihara participated to the Salon de Mai in Paris. In 1953 the first exhibition of the "Contemporary Art Discussion Group" was held in his workshop out of home in Shibuya with Shōzō Shimamoto, one of his students who would later be part of the Gutai group. Around the same time, a group called Zero Society had formed who experimented with conceptual and performance art. They would later join the Gutai formed by Yoshihara in 1954. During this time period, Yoshihara drew inspiration from children’s art, Zen calligraphy, and action painter Jackson Pollock. He rejected Japanese modernism of the 1950s and abandoned formal abstract painting. In December 1954, Yoshihara co-founded the Gutai Art Association which would later debut in spring of 1955 at the 7th Yomiuri Independent. The Gutai became known for their avant-garde performances and artistic methods. Yoshihara also wrote the group's "Gutai Manifesto" in 1956. In 1958, he exhibited again at the Salon de Mai and in 1961 in New York City at the International Carnegie.