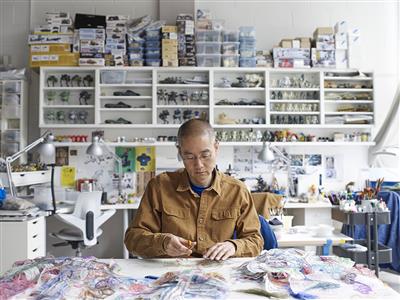 Do Ho Suh (hangul:서도호, born 1962) is a Korean sculptor and installation artist.

Suh was born in Seoul, South Korea in 1962. After earning his Bachelor of Fine Arts and Master of Fine Arts in Oriental Painting from Seoul National University, and fulfilling his term of mandatory service in the South Korean military, he relocated to the United States to continue his studies at the Rhode Island School of Design and Yale University. Suh leads an itinerant life, hopping from his family home in Seoul (where his father, Suh Se-ok is a major influence in Korean traditional painting) to his working life in New York. Migration, both spatial and psychological, has been one of Suh's themes, manifested through biographical narrative and emotionally inflected architecture. Best known for his intricate sculptures that defy conventional notions of scale and site-specificity, Suh's work draws attention to the ways viewers occupy and inhabit public space. Interested in the malleability of space in both its physical and metaphorical manifestations, Suh constructs site-specific installations that question the boundaries of identity. His work explores the relation between individuality, collectivity, and anonymity.

Suh has had solo exhibitions at Storefront for Art and Architecture (2010), the Serpentine Gallery, London (2002), Seattle Art Museum, the Whitney Museum of American Art at Philip Morris, the Artsonje Center in Korea, the 21st Century Museum of Contemporary Art, Kanazawa, Japan (2013), and the Smithsonian American Art Museum in Washington, D.C. (2018). He has also participated in group exhibitions at the Baltimore Museum of Art, Museum of Modern Art, New York, and at the Houston Museum of Fine Arts, among others. Suh has participated in numerous biennials, including the 49th Venice Biennale in 2001. In 2010, he was shown in the Liverpool Biennial, the Venice Biennale Architecture, and Media City Seoul Biennial, and the 9th Gwangju Biennale in 2012. Of all, particularly his exhibition titled "House in a house" held at the Leeum, the Samsung Museum of Art, played a big role in helping him to become the most famous artist in Korea.