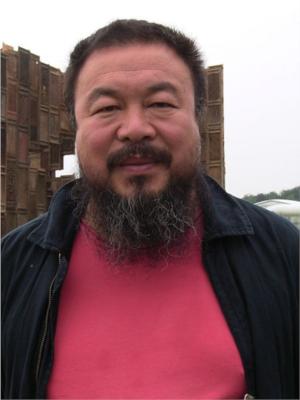 Ai Weiwei (Chinese: 艾未未; pinyin: Ài Wèiwèi,  English pronunciation (help·info); born 28 August 1957 in Beijing) is a Chinese contemporary artist and activist. His father's (Ai Qing) original surname was written Jiang (蔣). Ai collaborated with Swiss architects Herzog & de Meuron as the artistic consultant on the Beijing National Stadium for the 2008 Olympics. As a political activist, he has been highly and openly critical of the Chinese Government's stance on democracy and human rights. He has investigated government corruption and cover-ups, in particular the Sichuan schools corruption scandal following the collapse of so-called "tofu-dreg schools" in the 2008 Sichuan earthquake. In 2011, following his arrest at Beijing Capital International Airport on 3 April, he was held for 81 days without any official charges being filed; officials alluded to their allegations of "economic crimes".

Ai's father was the Chinese poet Ai Qing, who was denounced during the Anti-Rightist Movement. In 1958, the family was sent to a labour camp in Beidahuang, Heilongjiang, when Ai was one year old. They were subsequently exiled to Shihezi, Xinjiang in 1961, where they lived for 16 years. Upon Mao Zedong's death and the end of the Cultural Revolution, the family returned to Beijing in 1976.

In 1978, Ai enrolled in the Beijing Film Academy and studied animation. In 1978, he was one of the founders of the early avant garde art group the "Stars", together with Ma Desheng, Wang Keping, Huang Rui, Li Shuang, Ah Cheng and Qu Leilei. The group disbanded in 1983, yet Ai participated in regular Stars group shows, The Stars: Ten Years, 1989 (Hanart Gallery, Hong Kong and Taipei), and a retrospective exhibition in Beijing in 2007: Origin Point (Today Art Museum, Beijing).

From 1981 to 1993, he lived in the United States. For the first few years, Ai lived in Philadelphia and San Francisco. He studied English at the University of Pennsylvania and the University of California, Berkeley. Later, he moved to New York City. He studied briefly at Parsons School of Design. Ai attended the Art Students League of New York from 1983 to 1986, where he studied with Bruce Dorfman, Knox Martin and Richard Pousette-Dart. He later dropped out of school, and made a living out of drawing street portraits and working odd jobs. During this period, he gained exposure to the works of Marcel Duchamp, Andy Warhol, and Jasper Johns, and began creating conceptual art by altering readymade objects.

Ai befriended beat poet Allen Ginsberg while living in New York, following a chance meeting at a poetry reading where Ginsberg read out several poems about China. Ginsberg had travelled to China and met with Ai's father, the noted poet Ai Qing, and consequently Ginsberg and Ai became friends.

When he was living in the East Village (from 1983 to 1993), Ai carried a camera with him all the time and would take pictures of his surroundings wherever he was. The resulting collection of photos were later selected and is now known as the New York Photographs.