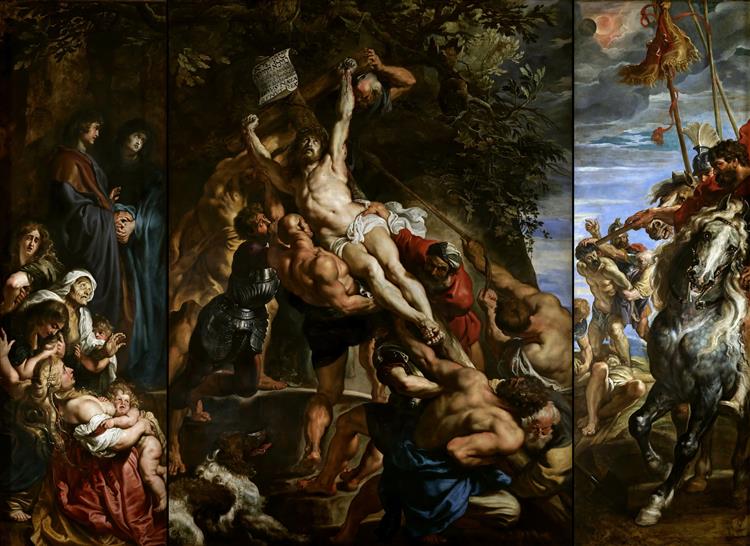 The Elevation of the Cross

The Elevation of the Cross is a triptych panel painting, depicting many rippling-muscled men lifting Jesus in the Cross. This painting clearly shows the influence of Michelangelo, Caravaggio, and Tintoretto, all of whose paintings influenced Rubens a great deal. Rubens completed the painting after returning to Flanders from Italy, after the death of his mother in 1608. This painting, along with The Descent of the Cross, was taken from Belgium by Napoleon, but they were later returned at the end of the 19th century. They are both now located in the Cathedral of Our Lady in Antwerp.

Peter Paul Rubens painted the triptych The Elevation of the Cross after returning to Flanders from Italy. The work shows the clear influence of Italian Renaissance and Baroque artists such as Caravaggio, Tintoretto and Michelangelo. The central panel illustrates a tension between the multitude of massively muscled men attempting to lift the cross and the seemingly unbearable weight of Christ on the cross.

Peter Paul Rubens' foreshortening is evident in the contortions of the struggling, strapping men. Christ cuts across the central panel in a diagonal, stylistically akin to Caravaggio's Entombment where both descent and ascent are in play at a key moment. Motion, space and time are illustrated along with the struggle to upright the cross. Rubens uses dynamic color and chiaroscuro boldly, a style that would become more subtle with time.

The triptych painting is located at the Cathedral of Our Lady in Antwerp, Belgium, along with other Rubens works. It was commissioned by the church to express their allegiance with Catholicism, after the split of the Protestants. Under Napoleon's rule, the emperor took the painting, along with Peter Paul Rubens' The Descent from the Cross, to Paris. The paintings were returned to the cathedral in 1815.

The Elevation of the Cross is also the title of a smaller oil on paper painting reproduction of the triptych painting. Also painted by Ruebens, he completed the piece around 1638, and it was given given to Hans Witdoeck, to use as a modello. The smaller painting is unique from the original, however, with the addition of color accents throughout the composition. Due to its size, some have suggested the painting may have been conceived as an independent painting to The Elevation of the Cross, to be given as a personal gift to Cornelis van der Geest. The painting is presently a part of the Art Gallery of Ontario's permanent collection, after it was purchased from George Holford in 1928.