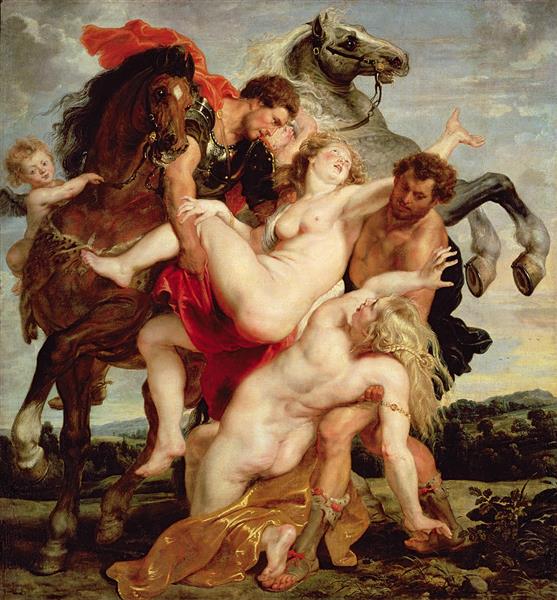 Abduction of the Daughters of Leucippus

The Rape of the Daughters of Leucippus is a 1618 painting by Peter Paul Rubens. It is now on show in the Alte Pinakothek in Munich.

The painting depicts the mortal Castor and the immortal Pollux abducting Phoebe and Hilaeira, daughters of Leucippus. Castor the horse-tamer is recognisable from his armour, whilst Pollux the boxer is shown with a bare and free upper body. They are also distinguished by their horses - Castor's is well-behaved and supported by a putto, whereas Pollux's is rearing. The putto's black wing shows the twins' ultimate fate. Phoebe and Hilaeira do not have distinguishing attributes and so which sister is which is unclear.

It was bought in Antwerp in 1716 by Johann Wilhelm and Elector Palatine. Initially sent to Mannheim, by 1805/06 it had reached Munich.

The painting is also notable for featuring in the Loriot sketch 'Eheberatung' (marriage counselling). Evelyn Hamann plays a marriage counsellor, with Loriot and Ingeborg Heydorn playing a couple coming for counselling. The counsellor asks the couple to describe the painting - the husband states "Two men taking two women for riding lessons", while the wife sums it up as "More of a holiday, with riding and things like that". The husband replies "The men are really helping out the ladies".